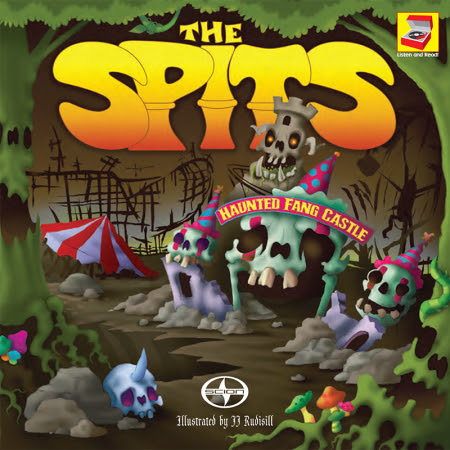 I used to say Seattle punk band The Spits never can surprise me because I expect the unexpected with them. Crazy costumes and crazy live shows are the norm. But this month look what they've done, The Spits have totally surprised me! First, Fat Wreck Chords announced they would be releasing a split single with The Spits and NOFX on November 23rd. A split with NOFX, really? And then this bizarre comic book story called "Haunted Fang Castle" and accompanying soundtrack, which was released by Scion featuring The Spits. It sounds like the synthesized voices of the Wood brothers telling the tale of a band of misfits on an adventure to save a princess, with interludes of weird psychedelic music and songs. It almost reminds me of that scene in "Dogs in Space" where Michael Hutchinson shoots heroin with his girlfriend and he tells her the story of the dragon that gets a stomach ache every time he eats people. The music isn't what you would expect from The Spits and the art is funny. The unicorn is a donkey with a horn, the wizard looks like Santa Claus with glasses, the robot is really an '80s arcade game, and most of the characters are wearing jeans vests. Check it out!
No comments: