Often under the radar of music fans, the Monkey Pub in Seattle's U-District continuously hosts punk, rock and alternative shows Saturday nights. The Monkey and The Galloway Arms are the rock'n'roll refuges in a sea of frat bars. It's the kinda place where shows are never more than $5 and you can still by $2 beers, and patrons hop across the street to Dantes between bands for jello shots and air hockey. This Saturday, 8/23/08, the Monkey has a great straight-up punk show going on with:

Seattle's All Bets On Death
Portland band The Altarboys

I've mentioned before going to shows at the old Storeroom Tavern on Eastlake, an old school tiny dive bar that hosted punk shows in the early '90s. The place was the subject of Zeke's first single, "Fight at the Storeroom" and I have many fond memories for me from shows and drinking there. Yesterday I stumbled upon an old issue of Hype with a great article/interview on the spot and scanned it for nostalgia's sake (click for full size):

Email ThisBlogThis!Share to TwitterShare to FacebookShare to Pinterest
Labels: The Storeroom 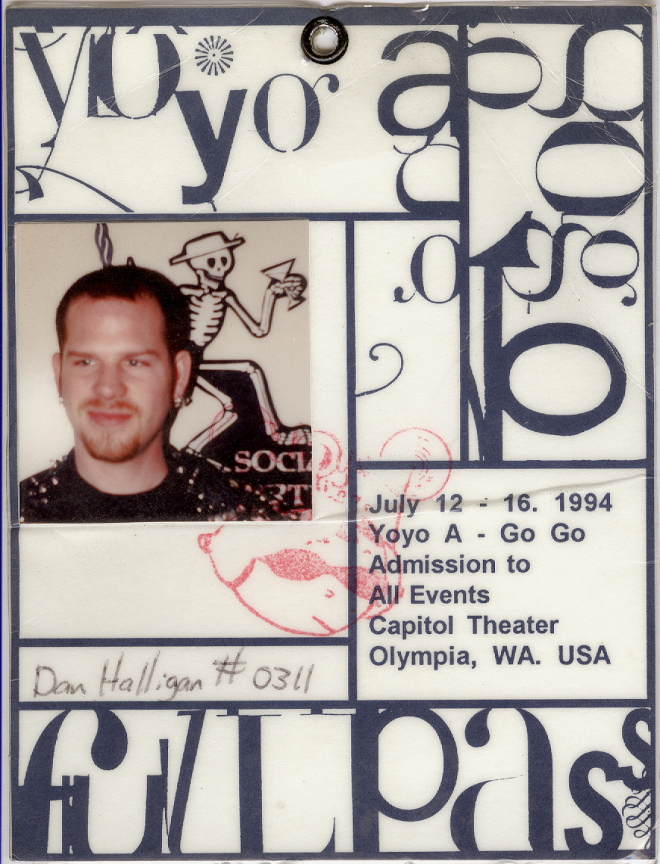 This is my pass from the first Yo Yo A Go Go in Olympia, Washington. The festival took place July 12-16, 1994. It was organized by a non-hierarchical collective of people which included Kento Oiwa, Pat Castaldo, Michelle Noelle and Pat Maley of Yo Yo Recordings (a small Olympia indie record label at the time when compared to Kill Rock Stars and K Records that focused on live recordings). Not surprisingly, the performances were recorded and a number of live albums resulted, including a 2-CD/3-LP compilation that's still available quite cheaply at BuyOlympia.com (a great website). The hype was good early on for Yo Yo A Go Go, so much so that some pretty big indie bands wanted to play and people from around the States were buying festival passes months in advance (like me).

I went for I think two nights/three days of the festival, driving down in my $400 '73 Hornet and sleeping in it by the train tracks at night. I met up with friends from Seattle, Reno, Olympia and all over each day to grab food, beers and watch bands each day. I met tons and tons of people, the social aspect of a smaller multi-day festival was almost as important as the music at times.
This is by no means a full list of bands that played, but the best I can piece together from the live album, my memory and web resources:

Email ThisBlogThis!Share to TwitterShare to FacebookShare to Pinterest
Labels: Olympia, Yo Yo A Go Go

Did the so-called civility laws eradicate Seattle of it's homeless population? Not at all. Although it did move them around a little, they built camps in "The Jungle" in the areas around and under Interstate 5 so they wouldn't be harassed so much hanging out downtown. But in recent years the city has kicked them out of The Jungle and they've moved back into city neighborhoods. A decade and a half later Seattle has just as much of a problem with homelessness, maybe because rather than trying to work towards a solution to the problem, city government's approach has been mainly to punish the results.
1 comment:

This year's Seattle Tattoo Expo will be prove to be the biggest and best yet. Mass stuff is going on, get ink, get drunk and rock out:

The last town at the end of Washington Highway 141, nestled at the base of the Mt. Addams and the edge of the Gifford Pinchot forest, is Trout Lake. Since the mountain shortcut road is currently washed out (Forest Road 23), one gets to the town by way of Highway 14 along the Washington side of the Columbia, then heads up into the mountains for 45 minutes on Highway 141.

Trout Lake is a small Washington town with a population right around 1,100. It's commercial core consists of a gas station, cafe, log cabin country store, espresso stand, craft store and climbing company. Around the edges once can find a bar, a couple bread a breakfast places, a spa, an RV park, and a small, but nice motel. Locals tend to be farmers, ranchers, contractors, loggers, forest service employees and construction workers. During the Fall and Winter the area draws snowmobile enthusiasts, hunters, snowshoers, mushroom pickers and cross country skiers, during the Spring and Summer it draws hikers, cavers, campers, huckleberry pickers, fishermen and mountain bikers. It's and outdoorsy kind of place and surprisingly liberal for a small town, possibly because my wife's family makes up about a third of it.

Normally you probably wouldn't have heard of Trout Lake, but it was in the news a bunch in July because of the 8,000 acre Cold Springs fire, which was really not that far out of town. I visited last weekend for the annual Trout Lake Fair and the highschool still had a bunch of trailers and firefighter tents set up, as it served as the staging ground for where firefighting crews planned, operated and lived. Thankfully the fire was contained and this year's fair went off without a hitch.

KJ's Bear Creek Cafe is Trout Lake's only restaurant, although I think you can get food Serenity's spa and the Trout Lake Tavern. KJs has a log cabin front and is rather small inside, with maybe 3 booths and a couple tables and counter seats, so there are picnic tables outside for overflow. The grill is right there in the open, which I like, so the cook can yell at you "How did you want that burger?" while they are cooking. The sometimes surly, sometimes downright hilarious staff manage to keep the orders coming pretty fast these days, which is good, because with one restaurant in town, it can get packed during the breakfast and lunch rush. Pretty much everything I've had at KJ's has been good to excellent. It's no frills, but the ingredients are fresh, the recipes down home, and they have years of experience and know how to do things right. When it's huckleberry season, don't hesitate to get some pancakes packed with the fat juicy berries, otherwise, I tend to go for the omelettes or bacon and eggs. Breakfast is what they excel at, there are a decent amount of choices, they are all good, and the prices are on the low end. For lunch and dinner it's mostly burgers, sandwiches and fries, nothing that will blow you away, but a welcome meal after a day of playing hard in the local wilderness or after a long drive up the Gorge.

KJ's Bear Creek Cafe is located 2376 State Highway 141, right next to the Chevron Station in Trout Lake, WA.
No comments: