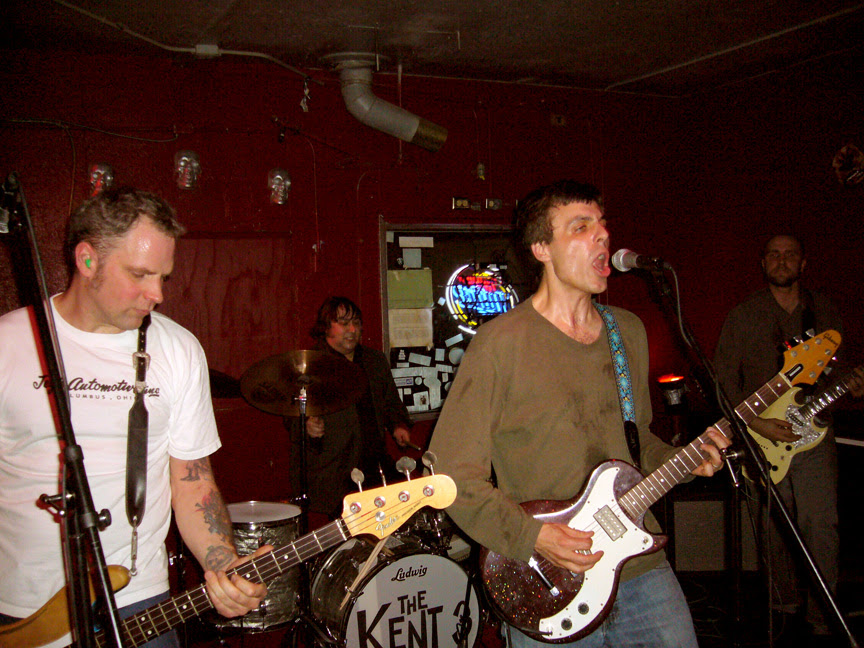 For people outside of Washington, the band name probably was confusing from the get go. "What's Kent and why are there four of them instead of three?" a California friend once asked. Kent doesn't refer to Kent State or Kent in the UK, but rather a sort of farming going industrial town about twenty minutes South of Seattle. It's a town that's long been the butt of jokes, particularly on Almost Live, which lampooned people from Kent as pick-up driving, beer in a can drinking, gun toting hicks. The stereotype probably did have some validity to it in the '80s, now it seems to be an area that's more thriving as people have been priced out of Seattle and even Tacoma. (Update: I turns out their name came from the cigarette brand) Anyway, leave it to me to get totally side-tracked into talking about things other than the band.

In its early years, The Kent 3 featured Mike Pitts on vocals, Adam on bass, Vivian on guitar, and Tyler on drums. Adam and Tyler previously played together in Brother Buzz, who put out a single on Empty Records and played around town quite a bit for a year or two. Kent 3 singer Mike Pitts left town after 1994's "Screaming Youth Fantastic" LP came out on Bag of Hammers. While I don't know the whole story, I heard rumors of his drug problems, including jumping out of Jimmy from Bag of Hammer's window with an armful of LPs and ripping off his girlfriend at the time. Needless to say, he took off, leaving the band without a frontman. Guitarist Viv (Konny Kindlund, who also performs solo around Seattle) stepped up and took over singing. The new and improved Kent 3 put out two singles in 1996 and an LP/CD the following year on Steve Turner's Super Electro label. Adam and Tyler eventually left the band and Jason Freeman (from the Vaccines) came in on bass, Kwab Copeland on guitar and keys, and Mike Correa on drums. Throughout the later half of the 1990s and first half of the 2000s the band played a ton of live shows and seemed to regularly be releasing records. In that past few years the band has played out infrequently, but still did a show as recently as October of 2007. This live photo I shot May 23rd, 2006 at Funhouse.

Musically, The Kent 3 seems to have been constantly evolving... or maybe more gravitating towards finding their perfect sound. Early on with Pitts singing, up through "Screaming Youth Fantastic," the band was straight-up garage punk. With Viv on vocals the band explored the slower and darker territory of spaghetti Westerns, surf, and country rock, although they still punched things up live. In recent years and on their last LP, they seem to have settled into a blend of both styles, which seems to fit them perfectly.

Kent 3 = most underrated Seattle band ever.

BTW - Mike Pitts and Adam Grendon of Kent 3 live down here in Portland now, as does Steve Turner of Super Electro.

Everyone is moving to Portland! :)

It seems like it some days, it comes up in conversations constantly in Seattle. Ken, I got the Dirtnap CDs, expect some reviews in the next week!

from the same show? YOU be the judge!

It has to be! Jason and Konny have the same shirts on as my photos. That's pretty good video and sound, way better than most live band footage I've seen on YouTube. Did you shoot that?

And the same stains on them! Yes I shot it. Unfortunately the sound gets really crappy at the end...some kind of bad buzz through the rest of the footage too. Sad sad.

Well at least in that song, nice shootin' Tex! I have a bunch of old band footage I shot in the '90s 8mm tapes I need to transfer to a digital format at some point. I'm sure a bunch of those bands would love the shit on YouTube. It includes Area 51, whose band members went on to be in The Murder City Devils.

Kent III refers to a brand of cigarettes, not the town of Kent. The band didn't break up between the first and second albums; Brother Buzz was before. The lineup changes would give a genealogist fits. Great band regardless.

I would like a copy of that show, even though it looks like I'm 50 lbs overweight. I have an old videocasette of the Pain in the Grass show from 1993(?) where we opened for Mudhoney.

e-mail me if you'd like a copy. Happy to oblige.

Thanks Ben! I don't how I got the timeline of Brother Buzz and Kent 3 wrong when I had it right in my Brother Buzz entry... doh. That's awesome about them being named after the cigarettes!

Dan, thanks for posting this. I just used it to compose a rundown of Kent 3 recommendations. For posterity, I love this group and 10 things.