In 2008, The Internet Overtook Newspapers For News

This is a chart from a December 2008 Pew Research Center study on where Americans get their news. For this first time, the internet overtook print newspapers as a news source for Americans. 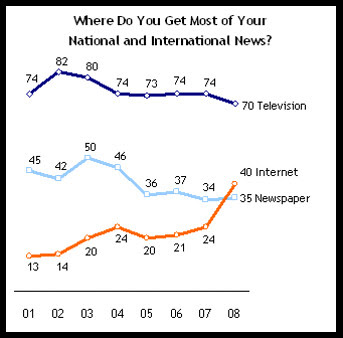 Both online and print news still lag behind television, which is American's primary source for news. However, this is not so for younger generations, where the internet equals television as a news source, and will soon overtake it, much as it has with newspapers. From the same study:

"For young people, however, the internet now rivals television as a main source of national and international news. Nearly six-in-ten Americans younger than 30 (59%) say they get most of their national and international news online; an identical percentage cites television. In September 2007, twice as many young people said they relied mostly on television for news than mentioned the internet (68% vs. 34%)"

Email ThisBlogThis!Share to TwitterShare to FacebookShare to Pinterest
Labels: The Death of Print

This is both good AND bad.

It's good in that news is so easily accessible, and in literally seconds, information can travel around the world.

It's bad in that literally anyone can "write the news" now, thus skewing it (or outright lying) in their direction.

PT Barnum once said, "a sucker is born every minute" and it's true. It doesn't matter what the source is for many people... they will believe, and hold on to, the first thing they read most of the time.

I am shocked to find out that people actually follow the news. Judging from when I had a job no one at work followed the news… they would usually tell me “I don’t like news it makes me feel bad” Ugh, thinking of my ex coworkers makes me enjoy being on unemployment even more than I already do.

I’m sure if I still had a job at that mega casino on the strip the hot news topic would be that lady with 14 kids.