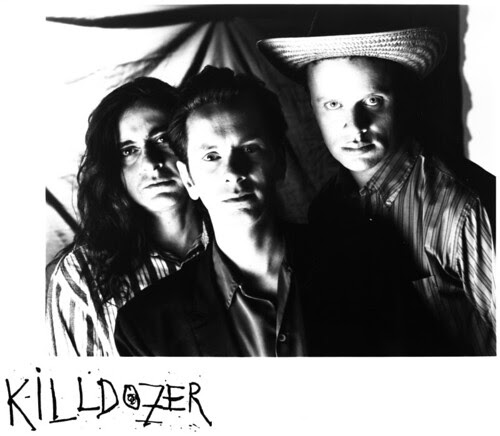 "Killdozer" was a bad 1974 movie about a bulldozer being used to try to dig up a meteor by a construction crew. The bulldozer took on a life of it's own and started running over everything in site and killing all the people that got in it's path. And damn, if you've ever heard some of the messed up covers by the band Killdozer, the name seems kind of fitting... they bulldoze through the songs and they take on a life of their own.

Killdozer were pretty much a grunge band before there ever was such a thing... when members of bands like Nirvana and Mudhoney were in their early teens, the members of Killdozer were forming their brutally heavy band in Madison, WI. The year was 1983, and the band's formula seemed like to make the creepiest, loud, slow, grinding art-noise-punk-rock on the planet. I first heard the band on the 1986 compilation "God's Favorite Dog," which included labelmates the Butthole Surfers, Scratch Acid (David Yow's band before the Jesus Lizard), Big Black, Hose and Happy Flowers. At the time this Touch and Go comp seemed to have the most fucked up and brutal punk/noise I'd ever heard. Killdozer's contributions included a cover of "Sweet Home Alabama" that was both painful and fantastic to listen too. I remember at the time having older roommates who listened to some '70s and Southern rock that were horrified when I first played the compilation tape. Ha ha ha, their reaction was brilliant as they recoiled in horror. That right their sealed the deal for me in liking this band.

It wasn't until the band's fifth full-length album "Twelve Point Buck" that really people outside of Touch and Go/Butthole Surfer fans discovered Killdozer... in thanks in many ways to Kurt Cobain talking them up and Nirvana, then Smashing Pumpkins, recruiting their longtime producer Butch Vig. But their window of fame was short lived and the band broke up in 1995. Killdozer later reformed in 2006 for the Touch and Go 25th Anniversary weekend. I'm pretty sure they are still gigging now, their MySpace page seems to indicated that's the case, check it out here to hear a few songs.

Email ThisBlogThis!Share to TwitterShare to FacebookShare to Pinterest
Labels: Killdozer

saw them my last year of high school and loved them...