I mentioned in an earlier entry on "Ladies And Gentlemen, The Fabulous Stains" that as a kid in the '80s, I'd stay up late at night watching a show called "Night Flight" on the USA Network. It often featured cult and underground films that provided my first exposure to numerous punk bands and subversive ideas. One of the films I saw a few times on "Night Flight" and later picked up on VHS tape finally was released this month on DVD... well sort of.

"Urgh! A Music War" was a British film originally released in 1981 featuring a wide variety of punk and new wave bands. It's all live footage, it comes off as one kick ass live concert featuring many up-and-coming acts of that era just when the major labels were grabbing onto the success of punk, but repackaging it as a nicer, gentler new wave. New wave actually included a wide variety of power pop, synth-driven pop, art rock, pop punk and post punk bands that all were kinda thrown into the same genre because they had a fashion or musical style that was a lot edgier than the current pop music, but not quite what most people would consider punk rock. Urgh! I thought kinda captured that transition featuring a few punk bands, a few pop and rock bands, and most bands that we might now call new wave, but who were mostly doing their own thing. What tied all the bands together was they were young, inventive and energetic. The live performances in this movie are great! I especially dug the Dead Kennedys, Devo, Go-Gos, X, The Cramps, Oingo Boingo, Joan Jett, 999 and The Police. For me in the early '80s when I first saw this film, it had a profound effect on me exposing me to so much new music I wasn't getting from commercial radio. It was one of those movies that helped open up the doors to punk and alternative music for me.

Warner Brothers has recently announced they are offering the movie on DVD-R, they are burning copies on a made-to-order basis. Odd that they don't think they can even sell a few thousand to do a full DVD run. They also haven't re-mastered it or done much work to the original movie at all for the DVD release. They added the trailer to the DVD and say they did it from the best available original print they had, but they didn't even add in chapter indexes for band tracks and apparently have omitted Splodgenessabounds' performance of "Two Little Boys." Kind of a lame way to re-release a cult classic music movie, but then again, at least they've rereleased it on DVD (unlike "Decline of the Western Civilization" and "Breaking Glass"). You can pick up your own copy of "Urgh! A Music War" for $20 over here. 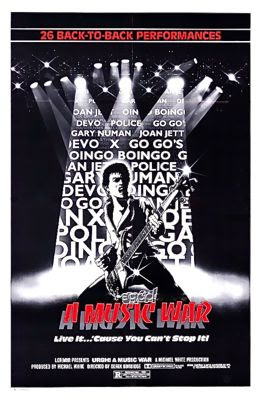 See Jim Skafish's blog on it for some great insight.

I'm the Chris at the bottom of the comments who has the Beta version.

Man, if warner bros is too cheap to reissue this other than made to order burn discs, then soeone should post this vid online so we can pirate the shit out of it!


Indie
This is the first time I’ve read about this. I keep learning new things everyday!