The Avengers LP re-issued and they're touring again! 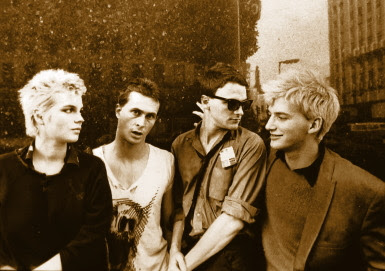 I wrote a full article on old San Francisco punk band The Avengers last year back here. Needless to say, I've always been a fan of the band, in part because of Penelope Houston's kick ass sneering female vocals and in part because of her great lyrics that were often quite smart satirically. The band had only had a brief career from 1977-1979, probably the highlight was opening for the Sex Pistols. Most of their recorded material, including their LP, was released after the band broke up. I remember scoring the LP back in the late-'80s for a few bucks at a used record shop in Seattle's U-District. By the time the '90s rolled around it was out of print and fairly sought after. CD Presents, who put it out, also did a small run of CDs, which I picked up too.

Thanks to Lookout Records releasing a CD of outtakes and live tracks in 1999 and another label putting out a live Avengers CD in 2004, the band gained a lot of new fans and sparked the interest of their old ones. So much so that Penelope Houston decided to get the band back together for a handful of shows before continuing with her solo career.

Flash forward five years. It appears that someone finally wrangled the rights for the Avengers first LP out of the hands of CD Presents. Amazon now has the CD listed for presale and says it's being re-issued on September 22nd with a second CD:

"Though not released until 1983 the Avengers' self-titled record (aka The Pink Album) features the band's recorded output from 1977-78, from the glorious first wave of punk rock. The Avengers were San Francisco's preeminent punk band, led by Penelope Houston's snarling vocals and Greg Igranham's distorted guitar riffs, and one of the first anywhere to feature a female lead singer. Featuring a second CD of previously unreleased live and studio material."

Sweet! If you've never heard the band, check out their MySpace page. And it gets better for those of us on the West Coast, they are also touring! The Avengers will be playing Funhouse September 11th, this is a show not to be missed!

Email ThisBlogThis!Share to TwitterShare to FacebookShare to Pinterest
Labels: Penelope Houston, The Avengers

Exciting! Plus, power pop pioneers, The Paul Collins Beat will open the show. My brother, who passed away in 1997, was the lead guitarist for them. This show is going to bring back a lot of memories.

I very, very rarely go see reunited old punk bands, but I might actually make an exception for this............

Yeah, she was from Seattle, went to college up at Western, then moved to SF and formed The Avengers. I shoulda hyped the local angle!

I think she still lives up in Bellingham.