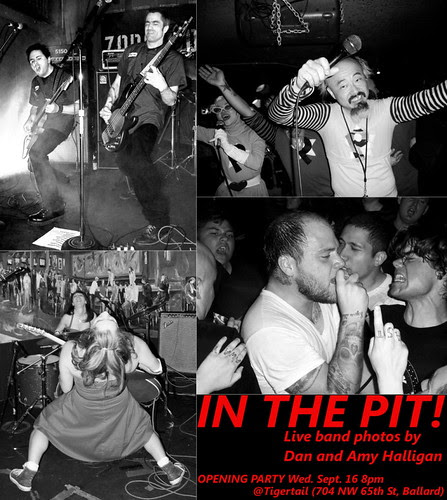 Amy and I are putting up a photo show of our punk and rock photography this month, the opening party is this Wednesday. This is an open invitation to anyone that reads this blog to come down to the opening!

Amy and Dan Halligan have been photographing and writing about punk and rock bands for twenty years. In the 1990s they published the Northwest's largest music zine, 10 Things, and in the 2000s their photos and writing were featured in almost every issue of the alternative publication Tablet. Their photography has also been featured in publications like The Stranger, Maximum Rock'n'Roll, Blood & Thunder and Vice Magazine. The Halligan's latest photo show, at Ballard's Tigertail, features explosive live band photography of punk and rock bands. Shining the spotlight on both national and local music, the show includes bands like The Spits, The Fluid, The
Bronx, Go Like Hell, The Hot Rollers, Zero Down and The Briefs.

The opening party is from 8-11pm, Wednesday, September 16th. It promises to be a fun party featuring rock'n'roll drink specials and recorded music from the bands featured in the show, please stop by! Tigertail is located at 704 NW 65th Street in Ballard and has a full bar and food.

The show should be up for about a month. Bands featured include:
The Amazombies, Green River, The Whore Moans, Zero Down, The Spits, The Hollowpoints, The Freeze, The Fluid, The Bronx, The Briefs, Peelander Z, The Hot Rollers, Go Like Hell and The Gloryholes!

Do you have a website with all the photo's you've taken that are for sale? Sadly, I don't live anywhere close to the north west or I'd make it out to check out your work.