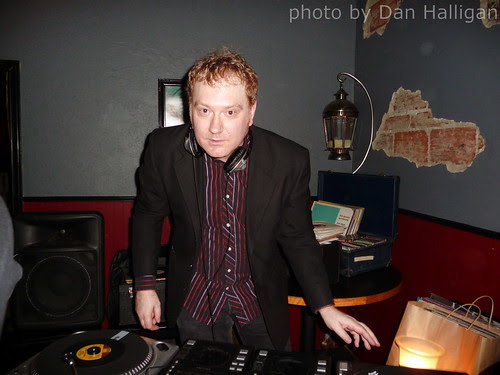 James Burdyshaw was already an established band guy by the time I got into the music scene in Seattle. He fronted 64 Spiders, who had one 7" out on Daniel House's C/Z Records, as well as two cuts on the legendary late '80s Seattle underground rock compilation "Another Phyrric Victory." He also was in somewhat legendary (in the late '80s Seattle scene) Catt Butt, Yummy, awesome garage punk band The Sinister Six, and he most recently fronted The Bug Nasties. James also has done time on my side of the music community, writing music reviews for both my old mag Tablet and Dawn Anderson's Backfire. Most importantly, he's just one fucking nice guy, he always stops and says hi when he runs into you and often has a great story or two to tell.

These days James is getting together various friends and doing a project he's calling Brother James and The Deciples of Junk. And he's also DJing old rock'n'roll and soul in various venues around town. The shot above of DJ Brother James was when he was spinning at the one year anniversary party for Gainsbourg in Greenwood. Within minute of when James started spinnin', the floor was crowded with people dancin' to the old soul singles he was throwing down. He spins at Studio 66 at the Lo Fi and other nights around town too, check his action out!