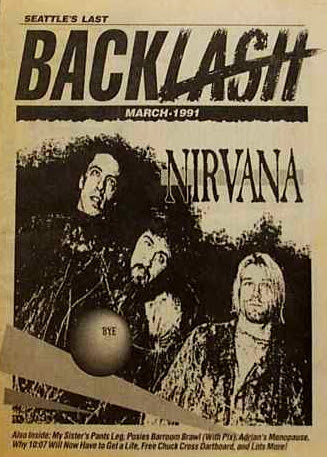 Backlash was a music fanzine published by Dawn Anderson from 1987-1991. Dawn was a local music fan and writer, I remember seeing her articles in Seattle monthly music magazine The Rocket back when I was in highschool in the mid-'80s. In 1987 she dove into self-publishing with Backlash, focusing on the dirtier, heavier, more underground and rock side of Seattle's music scene that The Rocket barely would touch on. Backlash covered punk, metal, underground rock, grunge before it was called grunge and even some local hip-hop. It was the first magazine to cover this young noisy rock band from Aberdeen called Nirvana, ever hear of them? It was always a fun read and could be found for free throughout Seattle in record stores and clubs. Backlash lasted for 34 issues, the final one was published in 1991 featuring aforementioned Nirvana just as they were starting to break big... crazy for Dawn to stop publishing right as the world's media began to focus on Seattle, but maybe at that point her job was done and those bands no longer needed her to write about and promote them. Backlash was a huge inspiration for me in starting 10 Things. My friends and I began talking about starting a zine not long after Backlash ceased publication because we knew there was now a need for someone to cover the local music that The Rocket and Seattle Weekly failed to cover (this was also before The Stranger came to town).

(This insanely complete issue listing was mostly copied from Dawn's ex-husband Jack Endino's website garage sale of past issues from about seven years ago, editing it all into a common clear format took forever, but it seem like this info should be documented for Northwest music history).

I only got 2 fanzines from an old grunge guy, one of those fanzines is superdope #5,...

I hope I can make a fanzine myself one day, I can draw a bit but not much and writing about good bands and interview them would be cool, I will ask a girl from a riot zine for help

I did a grunge fashion thing on the article from punk fashion (playboy), you can check it on my myspace,... if you like,...

i loved backlash, didnt dawn do an earlier zine called backfire as well?

Backfire was her second one, I'm doing a write up on it in a few days. I just scanned the cover of the issue with the Briefs on it in.

Awesome. Backlash is a forgotten gem for a lot of us then-under-agers who were slumming around looking for something to do around here.

excellent dan, i'll be looking for it.

Backlash was great. Whatever happened to Dawn? Anyone remember "Hype"- sort of a Rocket-ish paper that was around for a year or so?

Are copies of Backlash available anywhere? Specifically, I'm looking for November 1990...and the story on Karla Cruz. (See her at karlacruz.net, she' still rockin' and has a lot of material still to come. But I'm fasciunated with the early years)
Any help?

"Are copies of Backlash available anywhere?"

I don't know, I donated most of mine to the EMP for their historical collection, along with a couple hundred other Northwest Zines. One day I hope they actually do something with them like an exhibit, otherwise they probably are squirreled away in some basement archive. Jack Endino used to sell back issues on his website, you could try checking with him, although he's a busy man. There really is no good place to buy and sell old zines (Ebay isn't exactly DIY or a place most people would look for them).

I've got a number of issues' of
Backlash,including the august/sept. 88 issue & the july 89 with a letter
to the editor signed by nirvana re:
Chris's behavior at a recent alice in
chains show.most issues i have run
from june/july 88-alot of '89,i don't
seem to have any 90 or 91 issues,save
for the final march 91 issue.
got a number of vintage 85-91 "Rockets" two with nirvana covers,plus lots of old sub pop colums,deep six lp review,green river article etc. etc.
Also have 1 1/2 issues of hype.
the half issue has a nirvana interview about the time of neverminds release.
also have some vintage 82-86 "metalmania" fanzines with lots of
old mustaine era metallica stuff.
Im looking to unload some of these
get in touch and we'll see if we can work something out.

You can reach Dawn Anderson on Facebook; she lives in Tucson, Az.

As someone who wrote for all three of them, I can confirm that "Backfire" was actually the name of Dawn's first and third zines. The original "Backfire" ran from August 1983 to March 1984, and had a glossy color cover, quite rare for the time. The cover articles included Red Rockers, Bryan Adams, Quiet Riot, Motley Crue, Nina Hagen, and Girlschool. From that, you can tell that right from the start she covered every form of loud rock, from punk to metal.

When Dawn decided to start another magazine in the late '90s, she dusted off the "Backfire" name.