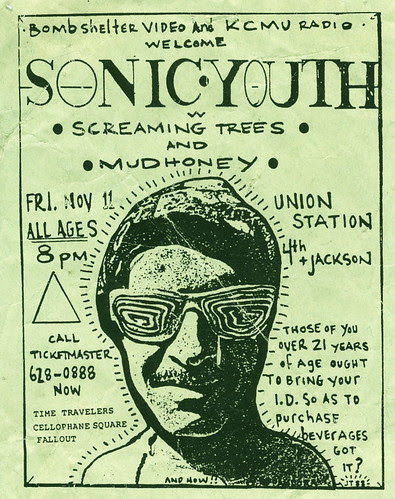 This flyer, not only rules because it's for an old Sonic Youth, Screaming Trees and Mudhoney show, but it also contains so many elements of Seattle's old music scene. The show was presented by Bombshelter Videos and KCMU (click the links for the old articles on them). It was at the old train station, Union Station, which I think only hosted this show and the Butthole Surfers/Nirvana show (and some raves and shit later). And look where you could buy tickets, at Time Travelers (an old record store downtown I need to do a write up on one of these days), Cellophane Square (which back in the old days and old location was a GREAT record store!), and Fallout Records. The show itself was fantastic... I think my friends and I all did too much drugs, drank walking to the train station from the bus, and then had a blast. I mean geeze, it was Mudhoney and fucking Sonic Youth, we had to get wasted and rock the fuck out!

I remember being in there when Sonic Youth were doing their sound check and Thurston kept asking for more reverb on the vocals. I guess he was thinking that this place is one big echo chamber anyway so I might as well make sound as bad as it possibly can. He susceeded nicely.

I too was at that show. the show: rocked. Me: drunk.

Can't wait to read about your thoughts on Time Travelers!!