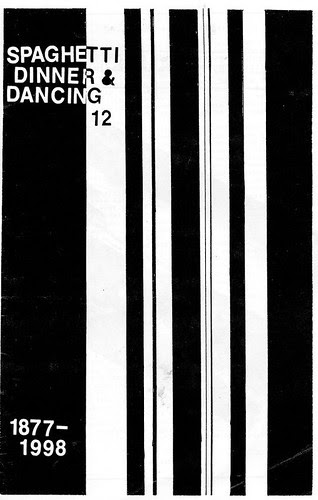 I just wrote about Shat Upon zine, probably the best zine coming out of Montana during the 1990s. But it would be unfair to overlook another zine that was much smaller and personal, but always a great read. Spaghetti Dinner & Dancing was a perzine published by Randy James out of Missoula, he published it from 1994-2002. The publisher and sole writer was obviously from the punk scene, he'd occasionally feature a band photo, zine reviews, or small write ups on a live shows, but the bulk of each issue was filled with stories about hiking, camping and Montana history. Most of the stories read like journal entries R. James wrote as he'd sit down at a bridge, on a rock, or by campfire on a hiking or camping trip. They were deep in imagery and gave a quite visceral feel for the nature around him. Some of the stories were precluded with a history of an area before the hike, other just dove right into the tale of the trip. There was a great sense of self-examination, as well as a disdain for the deteriorating condition of the wilderness areas the author spent so much time in. for , then hiking it and stopping to write about their observations along the way.

Today Randy still randomly publishes Darlene Rocknroll Fanzine and says he has another zine in the works.