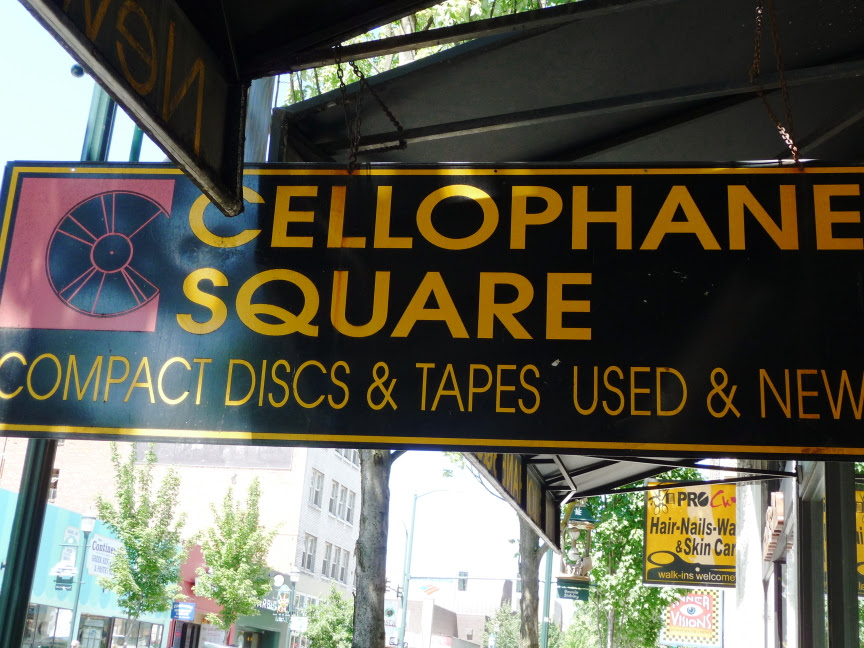 When I was in highschool in the mid-'80s and starting to delve into alternative culture, I kept hearing about this place called Cellophane Square in the University District. It was supposed to have punk and goth band t-shirts, records and tapes, all kinds of underground merchandise and was where you'd buy tickets to punk shows. Having grown up on the Eastside, hanging out at Bellevue Square as a kid, I pictured Cellophane Square as a punk rock mall. Imagine my surprise when I finally turned 16 and could drive to Seattle and found out Cellophane Square was a tiny, packed record store just off the Ave on 42nd (now the home of a Taco Del Mar).

Tiny though it may have been, Cellophane Square was thee place to go for vinyl back then. The store had actually been around since the early '70s and in the '80s was part of string of record stores around the U-District that I'd shop a couple times a week for the latest finds. When I moved to the U-District in 1986, Cellophane and the comic book store next to it became pretty much a daily ritual. Go to classes at the UW, then get stoned, go record and comic book shopping, then play video games at Space Port or Arnolds. Ah... those were the days.

When I heard Cellophane Square was abandoning it's spot on 42nd to move to a larger high profile spot further up The Ave in the mid '90s, I was pissed! Until I heard they were going to mostly ditch their vinyl and were going to sell it on Saturday for 50% off. I saved up $100, which for me was a lot back then, picked out the records I would buy off the wall, and was waiting to grab them when they opened the doors at 8am. Crazy too, a few years ago I sold most of those records on Ebay and got over $600 for them thanks to old punk vinyl being so sought after.

The bigger, newer location of Cellophane was never quite the same for me. They focused on CDs for a long time, only bringing back vinyl in a bigger way in the last 5 or 6 years. And the selection and prices weren't totally awesome. Still, I usually sold my used CDs there and got a great value in trade for new stuff. And I'd still hit it once or twice a month just to browse the vinyl and used CDs. 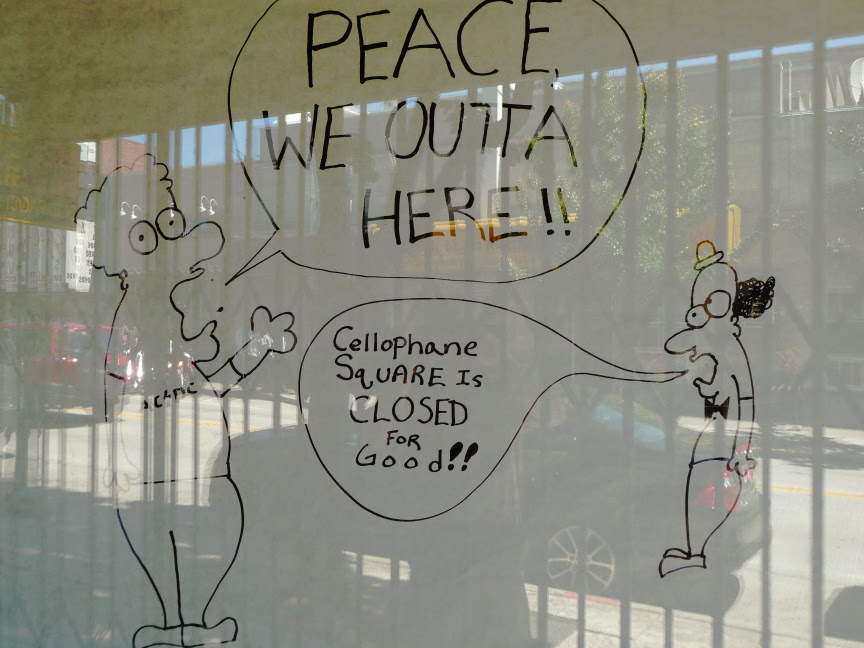 This past month Cellophane Square shut it's doors for good. And I kinda feel all Michael Jackson about it. I was sad when I heard Michael Jackson died because even though I haven't paid attention to him in almost twenty years, when I was a kid and Thriller came out, my brother and I probably listened to that record every day for six months. It was a big part of my life a long time ago, so hearing of Jackson's passing made me feel a little bit of my past die away. I have a similar feeling about Cellophane. In the past ten years it was a shell of it's former self, but for me in the late '80s, it was like home, it was my favorite record store I visited all the time. I knew and talked to most of the people that worked there, I knew which records in the bins were new that week, and I feel like much of what I learned in my formative years of being a punk rock music fan came from those record bins. So do I care that the store closed now? Not really, but I do feel like another piece of my past just slipped away. And that, my friends, gives me pause to stop, think, remember fondly, and feel just a bit of sadness.

CS was my home store for quite a while and while I hadn't been in quite some time and don't really miss it directly... one more piece of my history is gone.

shoot I didn't know this place closed. that sucks

I was shocked when I went into CS and saw a "We're Closing" sign that cut off the upstairs. Four days later it was all locked up without much hoopla. This was my fave store for used CD's. Anybody know if they are planning to open up anywhere else?

I just discovered that CS was gone today (12/20/09). I forst went there in '81 and rolled through the format changes as well as locations. I have no idea the amount of money I spent there over the years and the countless bands I discovered.

Also, 2nd Time Round on the Ave has closed it's doors as well. There are now only 2 places to buy music on the Ave. Sad day indeed.

Saddly, this is a result (as are umpteen other music store closures) of downloading and the way music is these days.