The Dark Sounds of The Prids from Portland 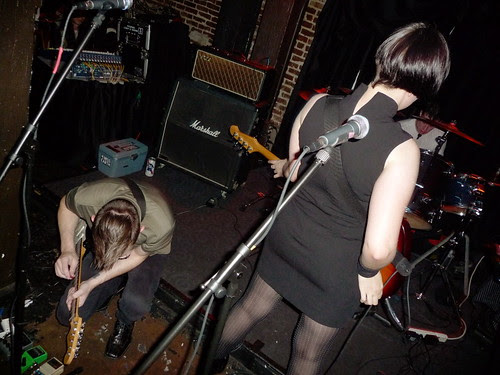 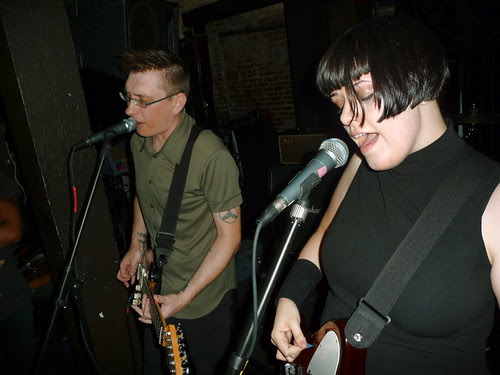 I flirted with goth culture back in the '80s, from the dyed black teased out hair and make-up, to dancing at Seattle's notorious club the Monastery, to going to Skinny Puppy and Siouxsie concerts. It was the first alternative subculture I dove into at 16 when I knew I didn't fit in with all the mainstream kids. It was fun to dress up, rock out, and be embraced in a community for being a weirdo. It worked quite well for me until I began to seek out more aggressive and political music and moved more towards the punk rock scene. I'm always slightly amazed that goth survived the '80s, as well as the grunge/alternative rock explosion of the '90s, but I guess I could say the same thing about punk rock. Subcultures never seem to die, they just go through phases of popularity and decline.

Portland band The Prids also flirt with goth... from the dark themes and musical style. And certainly when you see The Prids live, you can't help but notice their fans are dressed in a lot more higher end black clothes than at your average rock or punk show. But, the band also adds in elements of pop, art rock and post-punk, resulting in an alluring blend of dark indie rock. There is an intensity to their slow building tunes, songs layered within their songs, and melodies and bursts of energy lurking around the corner, seemingly ready to jump out. I can't say they blew me away live when I saw them last month in Portland, they did some back turning and looking down instead of at the audience, rather than fully embracing their role as our entertainment for the night. But I think that's part of their style--reluctant, holding something back, letting the energy build, but never quite releasing it and letting loose.

The band began as a two-piece back in the '90s and were performing live and releasing material as a duo until adding a drummer in 2005, then a keyboardist in 2007, when things really started to click. A year ago this month they were in a pretty awful van wreck on tour, you may remember me reporting about it here, but thankfully all survived and have recovered to continue to rock. The Prids have a pile of releases out and earlier this year, there was even a Prids tribute album. The band is currently playing out in the Northwest and working on material for a new album this fall. Check out their website for more info: theprids.com

Band members: Mistina Keith on vocals and bass, David Frederickson on guitar and vocals, Maile Tarries on keyboards and Joey Maas on drums

Email ThisBlogThis!Share to TwitterShare to FacebookShare to Pinterest
Labels: Portland, The Prids

I recently came across your blog and have been reading along. I thought I would leave my first comment. I dont know what to say except that I have enjoyed reading. Nice blog. I will keep visiting this blog very often.