When some friends and I first ventured into self-publishing and launched 10 Things, we didn't know dick about putting out our own fanzine. We were just obsessive music fans that knew Seattle was missing a big zine to hype local music and decided to fill the void. Artwork? Design and layout? Proofreading? Photography? Bah... we jumped right in and reasoned we'd figure it out along the way. I did 22 issues of 10 Things over the next decade and then 103 issues of Tablet with a whole different group of cohorts. 125 issues later, when I look back at the first issues of 10 Things, I absolutely cringe. Early issues were laid out on computers at Microsoft, we'd sneak into the library on the weekends to scan photos in. Then we did a few at my friend Ty's office downtown... all before I bought my first 486 PC for over $2,000 at Radio Shack with a credit card and started to lay it out at home. The artwork in the first few issues was horrible, mostly clip art and stolen graphics from old magazines I'd butcher up. About 3 or 4 issues in I realized I needed to find both band photographers and underground artists, so I started putting the word out and luckily, there seemed to be piles of talented people willing to work for free because they wanted to get published or were into the ideas behind 10 Things.

I was attending classes at the University of Washington in the early '90s, so I decided to put up some flyers looking for "punk or rock poster artists and cartoonists for a cool new underground fanzine" in the School of Art. I got a couple of responses, and the one that worked out by far the best was this kid Brent Watanabe who was doing posters for shows at the Old Firehouse in Redmond. Brent had a twisted style that I loved, one that I've seen a lot of other people do since then, but was very original in the early '90s. He'd draw cartoons and illustrations of happy, cute animals, only they'd be totally fucked up. They'd have 4 sets of eyes, holes dripping blood, a bottle of liquor or a cigarette... you get the picture. And he was super gung ho and enthusiastic. He did covers, spot illos, comic strips and section titles all in his crazy unique style for 10 Things starting from the early issues until I stopped publishing. Stuff like: 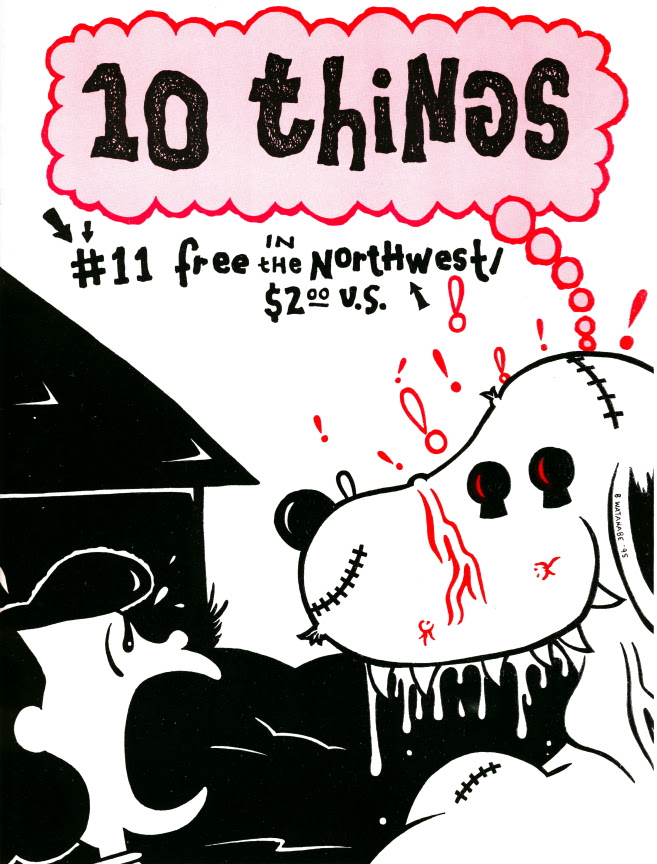 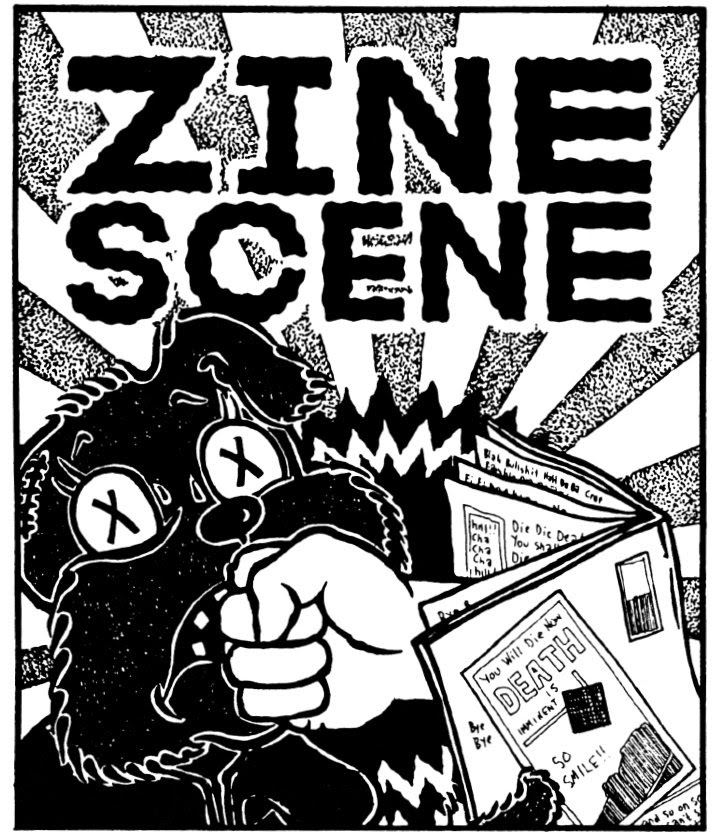 I think in part Brent liked doing artwork for 10 Things because I was open to anything and gave him no restrictions, whereas for posters for the Redmond YMCA sponsored all-ages shows he really couldn't have animals with their heads lopped off pouring booze down their throats or bears walking around with their heads sizzling in a frying pan. You know, the kids. And honestly, the more twisted stuff he gave me, the more I dug it and the more positive reinforcement he got to keep pushing it that direction. He definitely started branching out doing film, mixed media and developing his skills as a more serious artist (like a cool video for the industrial band Kill Switch Klick), but every time I'd tell him I was working on a new issue, Brent would work up some great fucked up cartoons and illustrations for me. Early on when I was asking him about his creepy characters and why they'd have two sets of eyes or limbs, he said he actually had double-vision and wanted to reflect that in his art. A few years later he got lasik to fix his vision and got the Japanese symbol for vision tattooed on his arm. Totally cool.

In recent years Brent's had shows and video screenings at places like Soil, the Decibel Music Festival, Cornell University, the Henry Art Gallery and a bunch of festivals. He's got a great website up of his stuff at Creepco.com.

This Friday, October 2nd, Brent has an art opening at Seattle's coolest art gallery, The McLeod Residence. You should go! It's called "Mixed Media Matters" and features a number of mixed media artists from the high Tech and low tech. Here's part of Brent's piece: 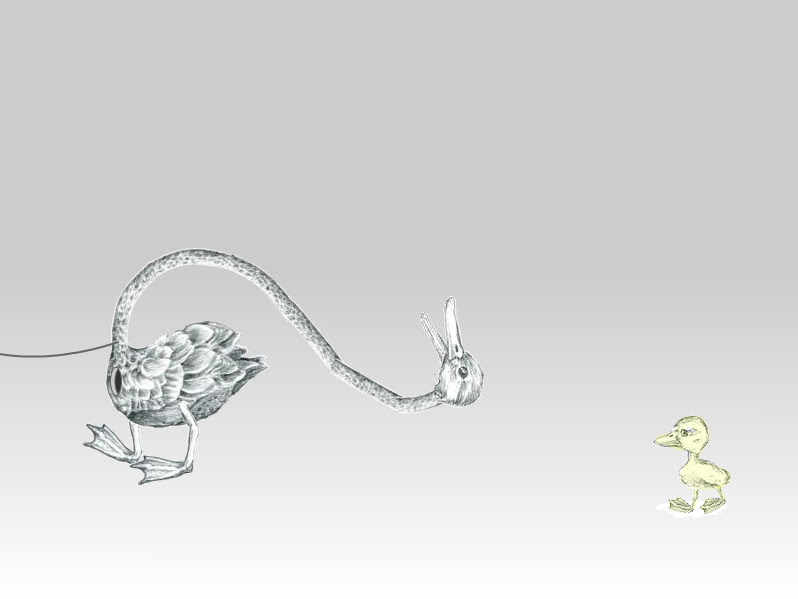 From the press release:

"A mix of media, from high-tech computer programming to low-tech street art, makes its way to McLeod next month in four new exhibits. An animation installation by Brent Watanabe, paintings by Curtis Taylor, photography by April Brimer and an urban art installation by a variety of street artists open on Friday, October 3 with a reception from 5-9pm. The exhibits will be up until November 22.

Brent Watanabe will create an environment in the Conservatory that is a cross between a large, ever changing drawing, a runaway video game on the fritz, and an experimental animation, complete with surround sound. Stack:Heap:Loop consists of an animation portraying a mother duck pulled in an endless trek through a desolate man-made environment, her head trailing behind on a distorted/elongated neck, ducklings falling from her mouth. In the corner of the room a nest of ducklings face the wall, visible only by their reflection in a mirror.

Brent is a local artist who programs computer applications to connect the gap between his interests in drawing, audio and video, mixing high tech tools with low-tech techniques. He works primarily in video and animation, and will have an artists residency at Jack Straw New Media Gallery in 2009.

The Parlor will house Curtis Taylor's Chinese Factory Paintings, 26 eight-inch-square photorealistic oil paintings, each of a different anonymous factory. The factories were documented in snap-shot form during a trip in 2003.

According to Taylor, "the Chinese factory is an engine of creation and change. Whether it produces consumer electronics, toys, pharmaceuticals, clothing, low-cost weapons---anything desired by a global marketplace---they each transform the life and political economy of the planet." His paintings are a distributable homage to the power of these buildings.

Curtis Taylor is a filmmaker living in Seattle Washington. From 1996 to 2006 he operated Vodvil, a film-and-performance storefront that made original narratives in opera and ballet. He has written, designed and directed shows which have premiered at Vodvil, Northwest Film Forum, Film Brigade of Chicago, Toronto Film Festival, SXSW, Center on Contemporary Art and On the Boards.

Portraits of Curiosity, a series of photographs by April Brimer, will hang in the McLeod Residence Foyer. The photographs tell a story in magical realism, with characters that are strong, adventurous, curious and sometimes mischievous. April creates portraits that are open-ended, inviting the viewer to speculate on the setting and motivation.

April Brimer has been taking photographs for over ten years. A former Seattle resident, she currently lives in Santa Barbara, CA, where she is pursuing fine art digital photography."

The important details:
-The McLeod Residence is located in Belltown at 2209 2nd Ave
-The opening is Friday, October 3rd, from 5-9pm
-It's free and they do have a bar!

Dan, thanks so much for posting this! See you tomorrow night!!!