Once "North of the channel" in Seattle was a cultural wasteland for Seattle's nightlife scene. Areas like the U-District might have been great for record stores and there were short-lived all-ages venues on the Ave and in Lake City, but the bar scene was mostly dive bars, college bars and sports bars. In the past decade though, things have changed. The Monkey Pub came on strong as the punkest bar in North Seattle with live shows and an alternative crowd. The Blue Moon got a lot more rock'n'roll and the Galway Arms also started doing shows (it's pretty punky these days, although they don't really advertise their shows). In Ballard the Sunset, Hattie's, the Tractor and Hazlewood brought a thriving nightlife (and now the Bit Saloon is in the game!). In Fremont the High Dive and Nectar brought music to a once fairly quiet artist neighborhood (although the bars still mostly suck there). Off of Phinney Ridge on 65th the Tin Hat and Tigertail are bars thriving with a hip younger crowd. So North Seattle is doing pretty good these days, but it's about to get better! The newest edition is Gainsbourg: 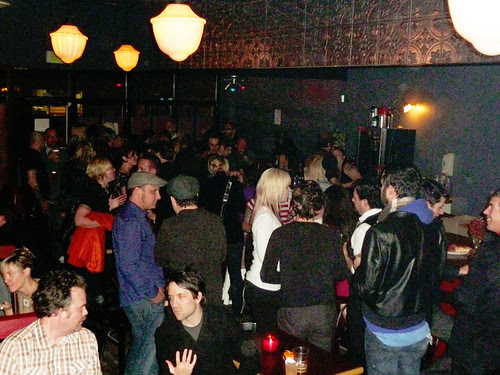 Gainsbourg is a lounge/bar on Greenwood just North of 85th that has it's grand opening tonight. It's owned by Scott Kannberg, JJ Wandler, and Hannah Levin. Levin's name you probably recognize from her writing at The Seattle Weekly and previously The Stranger, she's also on the air on KEXP. Behind the bar you'll spot bartenders from the recently closed McLeod Residence, The Sunset and Tigertail--all great drink servers that know their shit and are fun to talk to. And on the public side of the bar, your side of the bar, you'll find a dark, cool place with a rock'n'roll vibe and good drinks. I hit a soft opening private party a few weeks ago and really liked the look and feel of Gainsbourg, y'all should check it out! Levin said they may not have a full food menu or liquor when they first open, but both would be coming soon. So expect a small menu, beer and wine for a week or two before the full blown action happens.

Email ThisBlogThis!Share to TwitterShare to FacebookShare to Pinterest
Labels: Gainsbourg