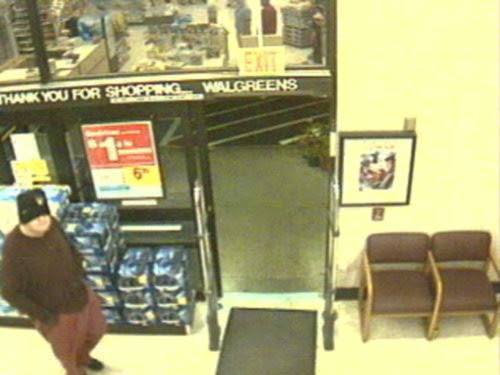 The Portland Police Bureau, in cooperation with Crime Stoppers, is asking for your help in finding an armed robbery suspect. On Wednesday, August 20, 2008, at 3:24 a.m. a lone male armed with a knife, entered the Walgreen's pharmacy, located at 940 SE 39th Avenue, demanding opiate drugs. After receiving several hundred Oxycontin pills, the suspect walked out the door onto SE Belmont Street. On Monday, September 8, 2008, at 9:32 p.m. the same suspect entered the Walgreen's located at 3909 SE Holgate Boulevard, armed with a knife and a demand note. The suspect approached an employee and was told that their pharmacy had already closed. The suspect left the store. At approximately, 9:50 p.m., the suspect walked into the Walgreen's at 940 SE 39th Avenue, approached the pharmacy counter, armed with a knife, and demanded prescription drugs. The suspect is described as a white male, late 30's, 6'0" tall, 200 pounds, with gray hair and brown eyes. The suspect walks "hunched" over and appears to be wearing a wig with a long ponytail.

Somehow this slipped below my Poison Idea radar when it happened last month. The suspect in this crime was later caught on a tip and it turned out to be Steve Hanford, AKA Thee Slayer Hippie, ex-drummer for Poison Idea and Final Warning. Hanford was responsible for a string of pharmacy robberies in the Portland area over the past Summer. Oh how the mighty have fallen... maybe the downfall to drugs and crime are karma for the Ian Mackaye EP Posion Idea put out. Ha ha ha! I think I've gotta go listen to PI's "War All The Time" album now.

That's a shame. I don;t thin Steve was ever in Final Warning. He was ina a band called Mayhem, I think. before he joined PI.

Final Warning lists him on their MySpace page as being a former member, I guess he played second guitar for a while:

"This line-up would remain unchanged until Final Warning disbanded in 1986 (except for a brief period at the end of the band's career when Poison Idea drummer Steve "Thee Slayer Hippie" Hanford played several shows with F.W. on second guitar"

Ahh, I stand corrected. I guess I never saw them at that time.

Sucks, I had heard he was a junkie - such a shame, he was one of the best drummers around at one time.

Maybe this will be good for him, I certainly hope so. To understand that statement you have to have some experience with addiction I suppose. He has burned just about every bridge made available to him through the many years, but he is still a very sweet human being somewhere inside there. There are still people out here rooting for you Steve.