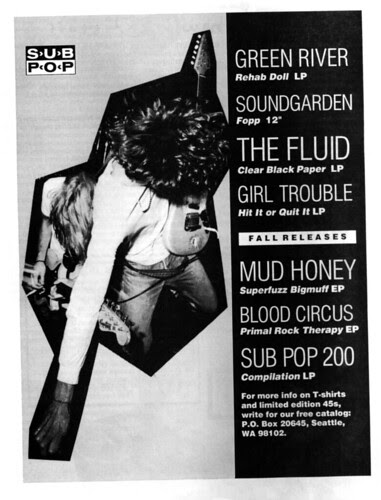 This Saturday is "Record Store Day," a chance to highlight the importance of a thriving (and in some cases dying) breed of indie record stores across America. 21 years ago if you were record shopping you would have picked up these records... I did. And I sold many of them for assloads of cash on Ebay later (seriously, me and hundreds of other people made thousands of dollars reselling Sub Pop records when the Seattle music thing blew wide open). That's the thing about vinyl, then, and vinyl now. It's limited, cool, and it's sought after. Underground, indie and punk vinyl is not only fun to buy, it really doesn't go down in value.

I'll be the first to admit I don't shop at record stores every day like I once did. Sorry record store geeks, but I put my time in for decades. Hell, now a days it might only be once a month. I've moved towards digital formats mostly these days. But I still have piles of vinyl I love to play, and it's mostly what I bring when I DJ. And I still seek out rare and limited editions of records new and old through record stores, tiny distros and Ebay. This Saturday, there will be a slew of limited vinyl hitting indie record stores across America. Here in Seattle, I implore you to hit Easy Street, Satisfaction, Sonic Boom or the handful of other record stores participating. You definitely will pick up something cool, they are going to have sales galore. And who knows, you might just pick up the next "Super Fuzz Big Muff," which 21 years ago I picked up because it looked cool, and today is still one of my top ten records ever.

...or does that sound too much like an emo band?

Record Store Day ruled! Our shop (Green Noise Records in Portland) had our busiest day ever.

Gotta admit, I was kinda cynical about the whole RSD concept going in, but now I can't wait for next year!