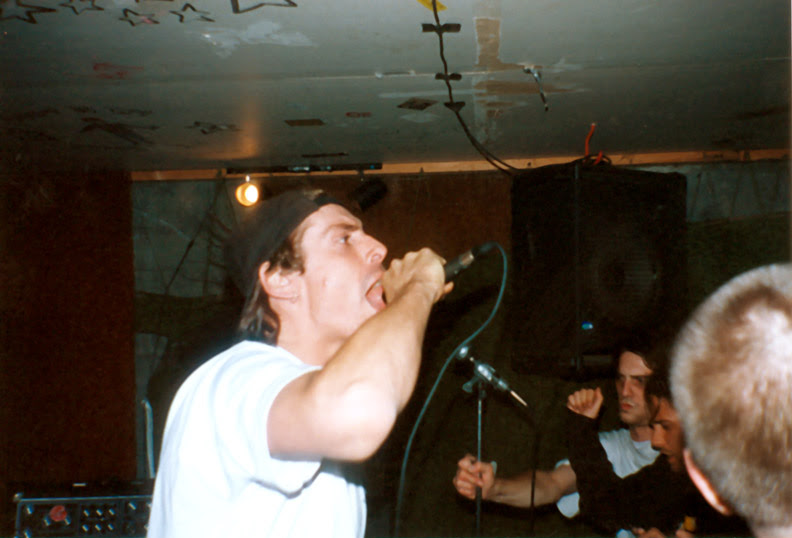 I'm obviously knee-deep in the photos from one Summer of great shows at the Goathouse. This one is of Capitalist Casualties. Capitalist Casualties formed in California in November of 1986. They have 2 dozen releases and countless tours under their belts. Their music can be described simply as explosive. It's loud, fast and angry, and the covers of their records are brutal and harsh. Their blend of hardcore and grindcore became known as power violence by the early '90s. They are a band I never really loved on vinyl, but who were completely awesome live (well, when Paula from Whipped isn't elbowing you while you're trying to take a picture :)

Hey Dan! Long time, no see. Holy shit. Was this the show that they played with Assuck? I remember that as being the best show I ever saw. It was a small space but it was completely packed, people were going crazy and both bands were fuckin intense. Any more pictures from the show? - Chris G

Hahah - i see i'm not the only one digging for more pics from that show. Assuck was fucking amazing. I remember Spinach (singer at the time) explaining the pronunciation of their name. "It's like ass and suck - Like sucking ass". Pretty funny.

I also remember a lot of people clearing out due to the heat and lack of oxygen. Myself and a handful of others (including one punk rock Jay) stayed behind to sweat profusely and thrash each other into the walls. Such a great fucking show.

I see the singer from Pregasm next to the stage.