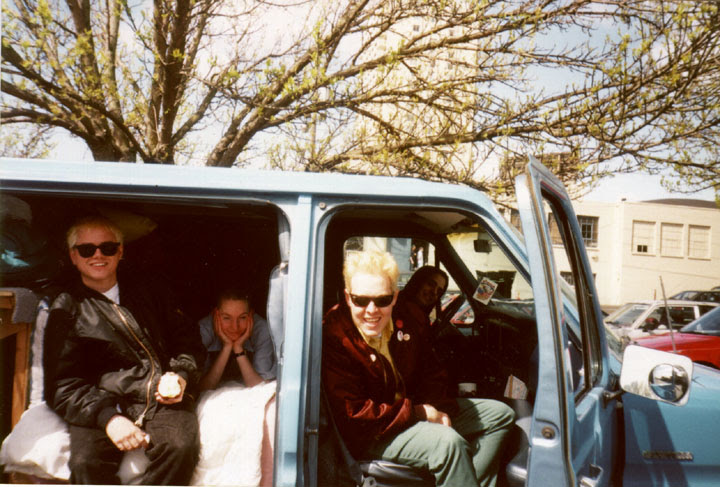 Zoinks! was both the expression Shaggy would make on "Scooby Doo" and a great pop punk band from Reno, Nevada. The band formed in 1993 and began playing basement shows, releasing their own singles and booking their own tours soon afterwards. This picture is of the band arriving in Seattle on their first Northwest tour, they crashed at my apartment in the U-District. At the time they were a three-piece with Zac singing and on guitar, Rob on bass, and Bob drumming. Zoinks! eventually got pretty big and released quite a few records on Dr. Strange Records, they also had cuts on a few big mid-'90s punk compilations on Lookout! and Epitaph. They were a great catchy band with often funny lyrics, not unlike Seattle band Sicko. The band broke up on 1998.

Zac went on to be in Screeching Weasel for a while ("Major Label Debut" and "Television City Dream" albums), Squirtgun, Crushstory, Common Rider, and currently plays in Big in Japan.

In 2007 Zoinks! reformed and has played out a few times live again. Check out their MySpace page for more info and song samples (the song about being in love with Uma Thurman is still awesome 12 years later). Zoinks! stayed with me on at least two tours and I've hung out with them multiple times in Reno, they are great guys!

Band Members: The current line-up is Zac Damon on guitar and vocals, Arne Cherkoss on guitar and vocals, Bob Conrad on drums and Shane Forster on bass. Rob Borges was original bassist and on most (all?) of the recorded material, Colin Pantell drummed for a short time at the beginning of the band.