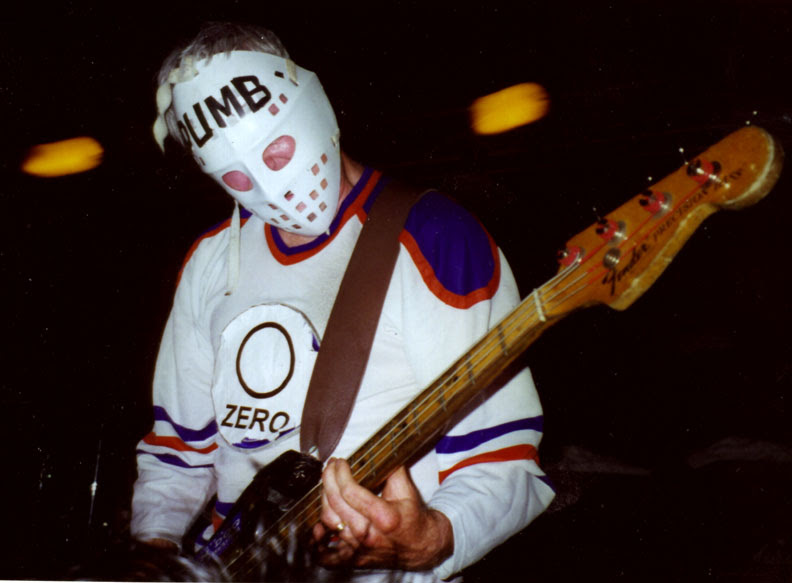 Inspired by the 1977 hockey movie "Slapshot," members of Vancouver B.C. bands NoMeansNo and DOA teamed up in 1991 to form the side-project band called The Hanson Brothers. "Slapshot" was based on the true story of some notoriously dirty Canadian hockey players. The band dressed as hockey players and sang punk songs about Canada's number one sport. Their debut single "Brad" came out in 1992. It was a parody of NoMeansNo's rather serious song "Dad" about child abuse (from the great album "Sex Mad"), but they did it in such a way that it paid homage to the original song and still turned out totally hilarious. The Hanson Brothers continued as a band through the death of their drummer (Ken Jenson of DOA, who tragically died in a house fire in 1995) and put out a number of releases and toured Europe. They've played Seattle a few times over the years. This photo is from their first Seattle show September 4th, 1993 at The Off Ramp, Alice Donut and Three Day Stubble were also on the bill. It was a great show! We interviewed them for 10 Things at it, I'll run the interview later. Since the band contains all three NoMeanNo members, they never really officially ended. Although their last recorded material came out in 2003, The Hanson Brothers played out live about a dozen times in Canada during 2006.