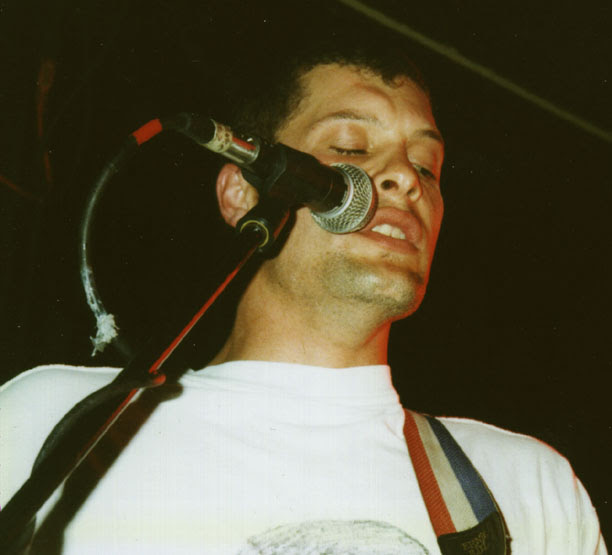 10: Now you guys have a little bit of a reputation of getting in some brawls…
S: No.
L: People are always picking on us.
S: Yeah, they always pick on us. The thing is, you see a flier, and it says "Come get wild and crazy! Girls, hot rods, and burgers!" And we're like, fuckin' A, all right! And you get down there and start going crazy, the flier said come get wild and crazy, and I'm getting wild and crazy, and everybody's just standing there going, "Uhhh uh uh". And so it's like, "What the fuck, asshole?" You know what I mean? The way we do it in is we fuck and fight ya know?
N: Here's your fuckin’ burger!
L: Actually, it's just the fact that we're all drunks and so uh, people don't like that.
N: Maybe it's cause we've seen the future.
E: We've been picked on just a little too much. All of our childhood, all of our lives. Now it's time...
S: Now if someone says something, I can fight.
L: I'm thirty… two.
S: Our thing is though, people come to our shows we want them to be able to do whatever they want. Enjoy themselves at any extent, you know? ‘Cause I've been to so many shows where just for moving my head, I get picked up by three bouncers and thrown out, it's bullshit.
E: At least in , that's how it's been. Since the early nineties.
S: So come to our shows and have a good time.
L: But, unfortunately, a lot of the people around town here that have a reputation for being trouble makers are friends of ours from . We just come from a different culture. Drinkin', fuckin', and fightin'.
S: Nick's from , they do it a little different there too. They do a lot of fuck fuck fuckin', but they do it with family members. And the pigs.
L: But no crazy shit!

10: So what's the deal with this video "The Spits Meet Chuckie" ?
E: Number three is in the making right now, it's a public access show. The first one we did was at least three years ago.
L: Chuckie is an alcoholic hobo. Stumbling along the railroad tracks, he runs into Timmy the train chaser who gets his head cut off by a train.
E: So Chuckie takes the head with him and abuses it. So anyways, Chuckie keeps this head alive in a bucket, and they hang out and play records… it's kind of a variety show.

10: So you guys play in different costumes at every show..tell us about some of your themes..I've seen Sheiks, I've seen cops, I've seen Reagan masks…
S: Well we were The Lords of Atlantis.

10: What the hell was that?
L: Well were wearing capes and beards with big A's on our chests, and lampshades cut out to make really high collars.
S: And we wore diapers with stockings
L: Then we were The Sheet Guys, which everyone thought was The Sheiks.
S: But we cut the holes in the sheets too big… and wore sunglasses. Later we were The Sheiks.
N: Then we were The Cool Guys, that was innovative, we spelled C-O-O-L on our shirts.
S: We've been prisoners, beach bum stoner dudes, and monsters.
N: And the previous keyboard player was always, no matter what, Tim-Tim the Robot.

10: So you guys have been through a lot of keyboard players.
S: And we like Nick alot
E: He's number nine, lucky number nine. He's workin’ out great and we hope he sticks around.
L: But at the end of the interview, you should put a little asterisk saying "Nick is no longer with The Spits!"

10: So Nick you used to be in New Sweet Breath...
L: Spits interview, Spits interview!
N: I actually have a new movie coming out. It's 8mm, and I want to show it at The Rendezvous.

10: So why did you guys decide to do four different covers for your first seven inch?
E: We have more than four.
S: Everyone else just does one, that's boring.

10: And all the covers you've been planning since '87?
E: I'm guessing we have at least fifty different covers for our seven inch.
S: Plus, we're putting out a split single with The Briefs that should be out soon. Then we're putting out a single on Rat City Records. Then we have a full length CD that's coming out in three weeks or so on Nickle and Dime Records.

10: So, do you guys like any of the current venues in ?
S: We do, but we've played them too many times. There's only a couple dive bars left for us to play left. Gibson’s is good. We need to play more all ages shows in . We don't do any of our own booking.
L: Every show we've ever played is ‘cause someone else has asked us.
S: Did I tell you guys I was in jail for beating up a chick?

10: What kind of music do you guys listen to/are influenced by?
S: Well my father was in a punk band back in back in the ‘70s.

10: What band?
L: They were called The Stooges. (laughter)
S: No, they were called Star. And they were kind of a glam punk band. And they played with Up, and The Mc5. Me and my brother we're always influenced by punk and rock and roll. And then we found Lance, and he had just beat up his sister, and we figured he could probably beat on some drums if he could do that...
L: I listen to a lot of harpsichord stuff.
S: I like bluegrass.
E: I like early Steely Dan, and some of that Yes stuff with that guy Bill Buxford on it.
L: I just got “Hemispheres” by Rush today.
N: I like the new Steely Dan album. And the Eagles.
S: I like and Journey, they kick ass!

10: Any final words for 10 Things readers?
E: Our number is 547-1738, give us a call. We like to play parties!
S: And work picnics.
L: I just want to say that The Spits are going to break up soon, and then people will be really sorry that they didn't like us.