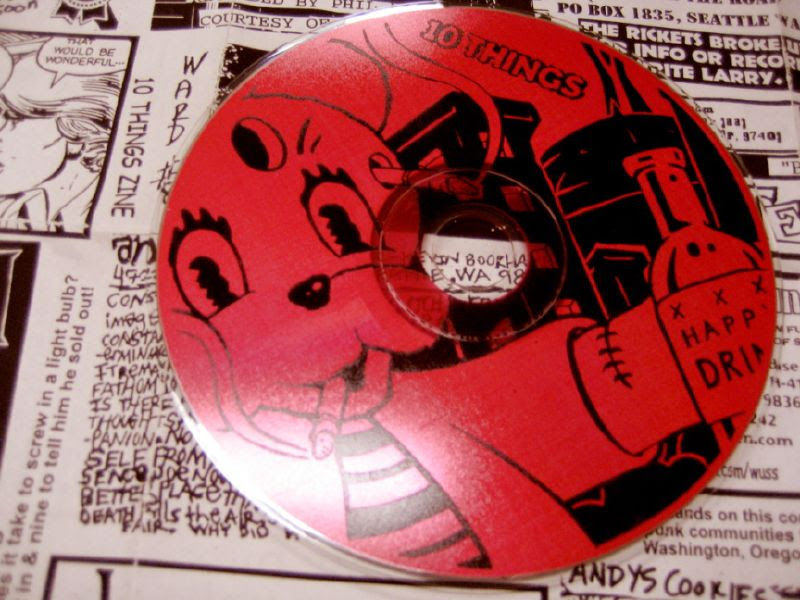 In 1997 I put out my first CD, a compilation of 33 Northwest punk bands. Copies were distributed for free with the first 1500 copies of 10 Things #16 (500 went to the bands). The project took about a year to put together. It started out as a plan to do a split 7" or flexi with two bands. My pal Chris Gual, who was working as a programmer at Microsoft, graciously volunteered to pay for it, hoping to release some friend's bands. The project blossomed into a full blown compilation and was way more work than I originally realized, but I think the result turned out great - we captured a moment with many of the punk and hardcore bands playing the Northwest in 1997, we got exposure for a bunch of local bands not only locally, but in tons of national fanzines when review copies went out, and listening to the CD after I loaded it to my server last night, I still think there's a bunch of great music on it. Today, eleven years later, I think only three of these bands are still in existence: Bristle, Lopez and Submission Hold.

Below are links to 320Kb MP3s of all the songs on the compilation. Yeah, they are a little big, but I figure I might as well just burn them once at high quality, you can downgrade 'em if you want to, to fit them on one CD, or pick and choose songs. Re-distribute at will! This compilation was free to begin with, it was done for entertainment purposes and to promote the punk bands of the Pacific Northwest:

Stats/Credit/Thanks: 33 Northwest bands from Washington, Oregon, Idaho, British Columbia and Alaska, 2000 copies, released in 1997, cost around $300 to mix + $1600 for CDs. I bugged a bunch of bands for quite a while to submit music, finally it came together with most of the bands I wanted contributing. Brent Watanabe, a terrific artist who did a lot of early band posters for shows at Redmond's Old Firehouse and was my resident 10 Things artist, did one kick-ass drawing to be printed on the CDs. Scott at Hanzek Studios patiently walked me through the process of mixing the CD and trying to get a cohesive enough sound out of I'm sure the hardest punk music he'd ever dealt with and a wide variety of recording qualities and volumes.

Awesome! I think I still have a couple of these CDs kicking around. Glad to see it available again. - Chris G

I think i have this too!
As weel as NOrthwest revolution and "We are all guilty" the outcast comp.

I moved to Seattle in 1996, and not long after I got here someone put this CD in my hands. I didn't know anything about 10 Things at the time, I was told only that "some guy is, like, putting these out now, it's pretty fuckin' cool". Fast forward to Bill picking it up one day and saying, "Hey - this is a 10 Things CD!" I hadn't put it together in all this time.

I can see it right now, tucked lovingly in the sleeve of a John Q. Fascist/Displacements 7-inch :)

Being 25 now, I got this CD in jr. high. Not to make anyone feel old, but this CD represented the end of an era for me, where you had to go out of your way to find anything that wasn't on Epitaph or Fat Wreck Chords from your local mall. By the time I was 15 or 16, Napster came about, and suddenly I could download every proto-punk basement tape released to 8 people in 1970 in an instant. I love the internet, and all the porn, information, and music it gives me, but there was something beautiful about the days when searching for music meant actual labor.

I remember when this came out with the zine. Great comp for the time. Still have my copy , but thanks for making it available again.