Ursula and the Androids (and Pho Bang and Jackie Hell) 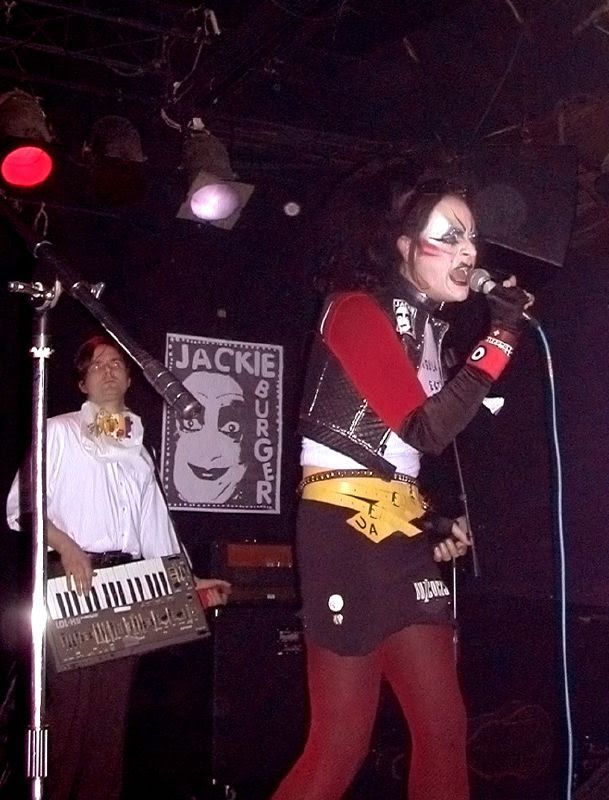 In 2000, two Seattle punkish drag queens, Ursula Android (in real life Marcus Wilson) and Jackie Hell (in real life David Latimer) launched a night called Pho Bang at Foxes bar in the Capitol Hill neighborhood, right across the street from Fallout Records. While Foxes was a gay dive bar, the night Ursula and Jackie put together appealed beyond the gay community to low-life punks and rock'n'rollers like me and my friends. The night usually featured one or two guest punk bands, incredibly offensive skits and commentary by the two drag queens, singing or drag performances by Jacki and Ursula, guest drag performers like the fabulous Sylvia O' Stayformore, a drag queen contest and dancing, usually to the punk and new wave tunes of DJ Baby J. The night was always fairly crazy... I think every time I went I drank too much, stayed out too late, got hit on by old men, and had a number of bizarre experiences. One thing was guaranteed at Pho Bang, you'd have a blast and laugh a lot! At times Pho Bang seemed really sloppily slapped together, at others it seemed well-planned and packed with a hell of a lot of entertainment and performances for $5. For regular attendees of Pho Bang at Foxes, you could follow the somewhat sorted soap opera of Jackie and Ursula's lives through their skits, which included multiple husbands, murder, babies, abortions and more. Good times! Jackie and Ursula graciously hosted our Tablet holiday party one year and their skits completely offended a fairly conservative couple I'm friends with to the point they left. Maybe it the strangling of a baby with a phone cord? Or Jackie chasing Ursula around with a big kitchen knife trying to stab her? Regardless, the fact that they could offend these people into leaving was pretty fucking awesome.

After Foxes closed, the punk drag queen duo hosted the night less often at other bars, including Sit and Spin, the Re-bar, the Hideaway and Nuemo's, usually under and altered name like "Faux Bang." I'm pretty sure the final one was with The Gossip at Neumo's. That night was huge, packed with hundreds of young Capitol Hill hipsters that had never got to witness the show when it was smaller, rawer and in an old gay dive bar. That night didn't have the same feel at all, although the bands rocked it, too many in the audience were laughing at the drag queen performances, rather than with them. Pho Bang was at it's best in a more intimate setting with an almost anything could happen feel in the air, it felt like you had stepped into an old John Waters movie, and maybe if you looked over in the corner there would be the egg lady in the crib yelling at you.

Both Jackie and Ursula developed a few regular songs they'd perform with help of a back up band, which usually included Ross from The Cripples playing synths. This photo is from a Faux Bang show at the Hideaway in January 2002 (I think) of Ursula and the Androids performing on stage. Dirtnap Records put out a split single the same year with Jackie and the Control Tops on one side and Ursula and the Androids on the other, both doing their popular songs from Pho Bang. Ursula did "Babies" and "Foxy Roxy" and Jackie did "Tonight, I Kill" and "Expensive." They also appeared on the 2003 Screamers cover compilation "The Necessary Effect" put out by Extravertigo Records.

I've got a bunch of Pho Bang photos from Foxes to scan in, I'll be putting them up over the next month, including some awesome ones of The Valentine Killers dressed as Turbonegro.

The Pho Bang shows at Fox's, to me, always felt like what it must have been like in the very early punk days in NY. When the punk secen really was a gathing place for societies outcasts, misfits and weirdos. When combining gay and punk culture didn't seem like such an odd pairing. I always look back at The Gloryholes Pho Bang show as one of our best. Maye not form a musical perspective (we were pretty sloppy) but from a preformence standpoint I had more fun at that show than just about any other.

You know, that's kinda the same way I felt about it. Yeah, I definitely remember that Gloryholes show being a blast too, and I do have pictures of it in my piles of photos to scan.

Awesome, I can't wait to see them. I remeber that you were the first person I landed on when I came flying off the stage.

Tuesday Night Pho Bang. Those were the best. Weird skits and lip syncing, punk band, then dance par-tay 'til the wee hours.

I remember watching Dave Bessenhoffer throw his guitar across the street after a Pho Bang show in a drunken rage. I remember fake blood getting on me from one of Ursula's skits, and then having a 7 foot tall drag queen try to lick it off. I remember being there and thinking "one day, we'll all talk about this like it was a near religious experience". I went to a Re-Bar Faux Bang, and a Hideaway Faux Bang, but it was never really the same. Thanks Dan!

Geezzzz just googling old friends and I see Marcus Wilson is still out there doing his thing. Glad you are still alive. We were friends in high school and in a garage band called Rain. I remember the drummer thought he might be gay...might?? My favorite singer was Freddie Mercury so I was hoping it would be good luck. We only had 3 songs and two parties in our short existence, but it was fun.Anyhoo, Marcus, keep yourself alive. Matt Johnson, Phoenix.

Wow! I have been trying to find David Latimer for years! AKA Jackie Hell. If anyone knows how to get a hold of him I would be eternally grateful! We were fast friends back in high school and got into much mayhem!

Wow, he was everywhere in Seattle for years and years, but probably always under the moniker Jackie Hell. You can find him here:

Thank you soooo much! I was just talking with another friend who also hasn't been able to get in touch.