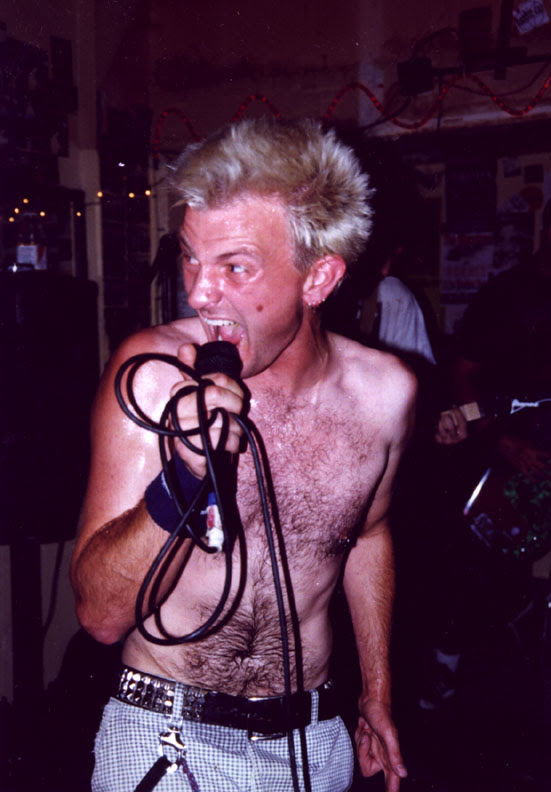 Sometimes I think I was only one of the dozen or two people who were really into Seattle's Monster Truck Driver. They were around in the early '90s playing The Storeroom and The Lake Union Pub alot and had the great ability to float from pop punk to more metally hardcore. When the band played live, lead singer Jay (pictured, I think performing at Uncle Rockey's around 1995) was totally into it and a kick in the pants to watch. It's always great to hear a guy that's looks kinda crazy singing "So what if I'm a psycho!" I probably saw the band a dozen or more times and they didn't disappoint once.

Discography (I need some help here, this is the best I could do):

Thanks for putting these bands on the web. I played drums in this band and it's fun to see all the pictures of the bands from those days.

Thanks Andy! Honestly, half the reason I'm putting this shit is up is to get email from people like you that can fill in the holes on bands and band members and appreciate my attempts at trying to document shit. I have like 3,000 photos still to scan in from the late '80s up to today and tons of bands to cover - mainly because Seattle and the Northwest has put out such kick ass music for the past two decades to keep people like me entertained.

I can remember hanging out at the storeroom with these guys. they played great shows at the lakeside and even sound pretty good in the studio.

I got a copy of one of their albums
from them--was it still a cassette then or a CD?

It's funny, a couple years ago I worked with Jay at a warehouse in Georgetown. I packed bottles in boxes all day, which sucked, but that guy was fucking hilarious and kept everyone entertained. I think his current band is called The Undisputed Heavyweight Champions.

"I got a copy of one of their albums
from them--was it still a cassette then or a CD?"

I have the album on CD, I think it came out on vinyl and CD, I doubt cassette.

I lived in the same apartment complex with the bass player. I forget his name, but he was nice guy. I think me and my friend had to take him to the hospital one night after he took too many pills. My memory is fading, but that seems right.

holy shit! nice work Dan. i used to play rythm guitar in MTD. some of the best years in my life! my brother was the bass player, and i don't recall him going to the hospital for pills, but that could happen. it's not the same dirty rock anymore! Jay and I formed undisputed heavyweight champions after that in '99. cool to see no one's forgotten the Driver! cheers

Yeah, great band/great dudes. I booked a show for them in Upstate NY around '95/'96 or so. Prob some of the coolest dudes I dealt with.

Cool retrospective. They also had a track on the Home Alive soundtrack, it was called 'Time Is Dead'

Did you say...so what if I'm a psycho? I think that Mark Hannah wrote that about my dad's girlfriend Kerrie...