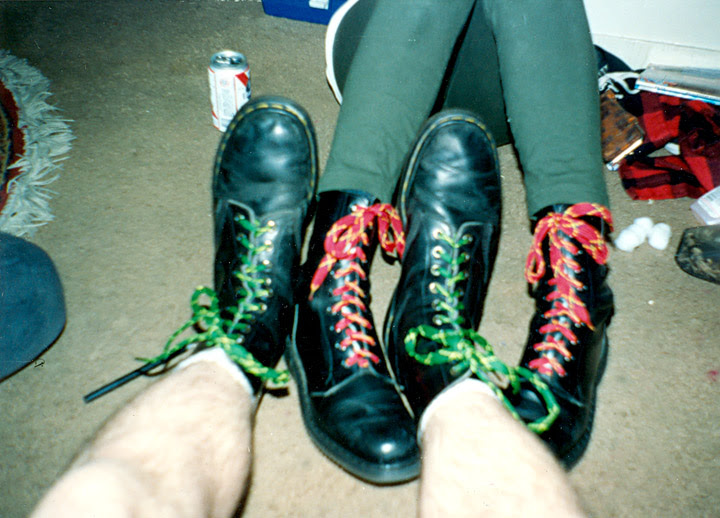 I can't remember when I first saw a pair of Docs, but I know by about 1987 I had to have a pair. Back then you had to mailorder them from England, much like Manic Panic hair dye, until John Fluevog shoes in downtown Seattle started carrying them. I bought my first pair for around $120, which was insanely expensive in the late '80s. But they were way cooler than combat boots for aspiring punk rockers. The big fear at that time was that skinheads would steal your boots. They were known for chasing down punk kids, beating on them, slicing their laces with a blade and stealing their boots. If a skin asked you what size your boots were, you'd get out of there quick! We'd even lace them different to make them hard to steal by tyeing a knot on one end and lacing it all the way through from the bottom to the top. It looked pretty rad too.

And lace colors were a total big deal. I remember an Anti Racist Action huge mohawked dude at the Lake Union Pub giving my friend total shit for having red laces, calling him white power and fascist. He totally wanted to brawl with us. It was funny too, because it was my friend Tony who had red laces... because he was Native American! He had long hair and brown skin and looked very native, hell he was usually getting into fights with Nazi skins himself.

It wasn't long before you could buy cheaper Docs around town at places like Retro Viva and The Cramp on Broadway... and even later Nordstrom's. My favorite pair of Docs were 20-hole bright blue ones I bought at The Cramp, they were totally ridiculous, but I loved them. My friend Karl bought a pair of pink steel-toed Docs at The Cramp as well and for the next few years was often referred to as Pink Doc Karl. Ha ha ha! Nowadays Dr. Martens are everywhere, no one cares about your laces, and they are priced like any other boots. But back in the '80s they were a huge deal and you suffered through the first month of heal pain because it was that cool to have on a pair of Docs.

Here is what the lace colors were said to mean back in the day:

lace colour is still a big deal. I recently had grey ones that happened to look a bit too light and I got alot of shit for them. It just became more complicated b/c different groups use different rules. Basically white and red are the big ones to avoid cuz they are the most well known for being white pride colours. At least thats what it is like here in NYC...

Ha, just goes to show some people are still living in the '80s. The politics of fashion... still? I think there will always be a segment of even underground scenes that is way too caught up in judging in policing the behavior of others rather than doing their own thing and having fun.

same with any left wing movement dan, there are always self appointed purity police pointing fingers.

thats wierd, cos this 80's punk in camden, london(where im from) told me red laces stood for anarchy....i wear one white one red just to see if i'll get my ass kicked, im mixed race and have had so many people ask me if im a nazi cos of the laces...might try black n white tho....ska is the sound of the revolution for real.

Sure, expressing political beliefs through shoe laces seems a bit silly, but it's not that different than gay dudes using colored bandannas to signal to each other what kind of sex they are into or even punks wearing stuff like anti-authoritarian or anarchy patches on their jackets to let people know what type of politics their into. Wearing your politics on your sleeve, so to speak.

The eighties was a great and wonderful era to have grown up in or lived in!
[url=http://www.theeightiesfashion.com/]80's fashion[/url]

so i came across this looking up docs and what they meant. i've been wanting to get some, and this seems like a good place to ask: by wearing docs with the regular laces they were sold with, am I standing for anything? I'm wanting to remain completely neutral/not supporting any white power and shit.