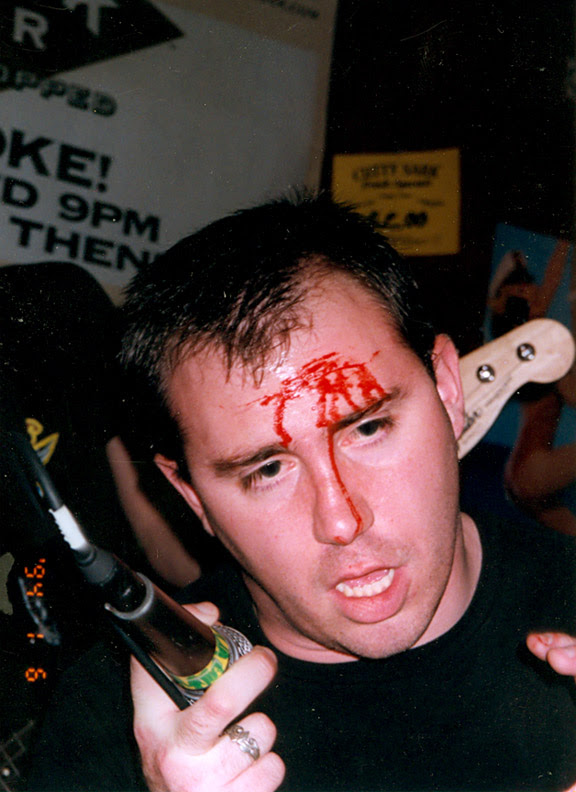 That photo I posted of Duane Peters' bloody forehead yesterday made me recall an old picture of The Valentine Killers I had. Sure enough, I found it!

The setting: Gibson's Bar & Grill in downtown Seattle in the middle of 1999 (ignore the incorrect date stamp on the photo). Brian Foss was booking the shows and Friday nights there was an awfully tempting double-whiskey sour in a pint glass drink special that lead singer Brian LaManna was fond of. A few songs into The VK's set he smashed his drink glass on the floor and sliced his forehead open. He dripped blood the rest of the show. Later I remember Stu being kinda pissed about it, but from the crowd's viewpoint, it was pretty awesome!

Stu was often pissed about a lot of LaMana's antics. :)
There's a great interview of them on youtube. Brian's going on and on and Stu is just looking more and more irritated by the second.

Is that the Kansas interview on YouTube? I didn't think Stu was THAT irritated with me (that night anyway)...most of the VKs inner-circle folks were never thrilled by the bloody forehead trick...in retrospect, it was slavish Iggy/Stiv/Candy Snatchers' worship...kinda embasrassing in my old age...