The Kings of Rock 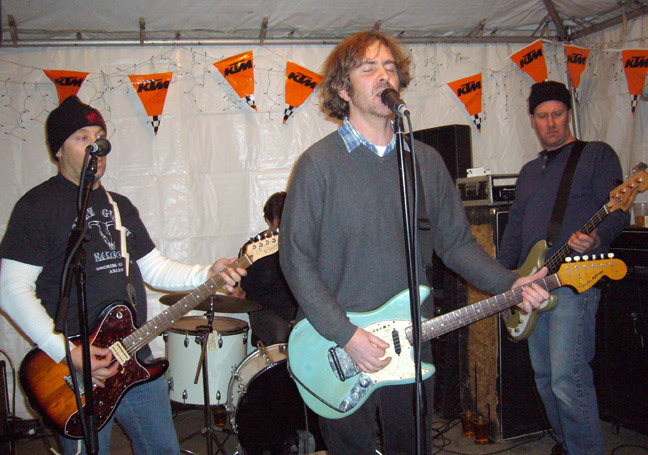 I don't know how it happens, because I've only been to Smarty Pants in Georgetown about half a dozen times, but I've ended up at their yearly Ice Holes benefit shows at least two or three times. Maybe it's because great bands often end up playing to help raise money for Seattle's "Premier Motorcycle Ice Racing Team." Or maybe it's because a bunch of my Rat City Rollergirl friends hang out there and drunkenly call and say "You HAVE to come down to Georgetown tonight!" Who knows? But I do like Smarty Pants, it's a cool place with great food and drinks, it's just a bit of a drive from the city. And I do like the Kings of Rock, even if they were sloppy as hell at this show, probably because they hadn't played live in over a decade.

The Kings of Rock formed during 1987 after The U-Men had broken up. Tom Price was looking for something fun to do and recruited his roomate Don and co-worker at Fallout Records Tim Hayes. They recruited a 15 year old kid to play drums. The band played live and recorded a bunch in the late 1980's before breaking up in 1989. They played a reunion show in Bellingham in 1990 for Garageshock and had a few posthumous record releases after the band had split. As far as I know, this show at Smarty Pants December 3, 2005 was the first time they had played together live since Garageshock '90.

If you want to hear The Kings of Rock, hop over to what could practically be our long lost brother blog Lamestain. There's a link on the right. Lamestain covers a ton of great bands from the Northwest in much the same era that I do here at 10 Things, where I lean more towards covering punk and featuring photos from my mammoth archives, Lamestain's highlight is a bunch of MP3s and a focus more of a grunge and rock bands. They put up the whole Sonics tribute album here and it's a great listen!