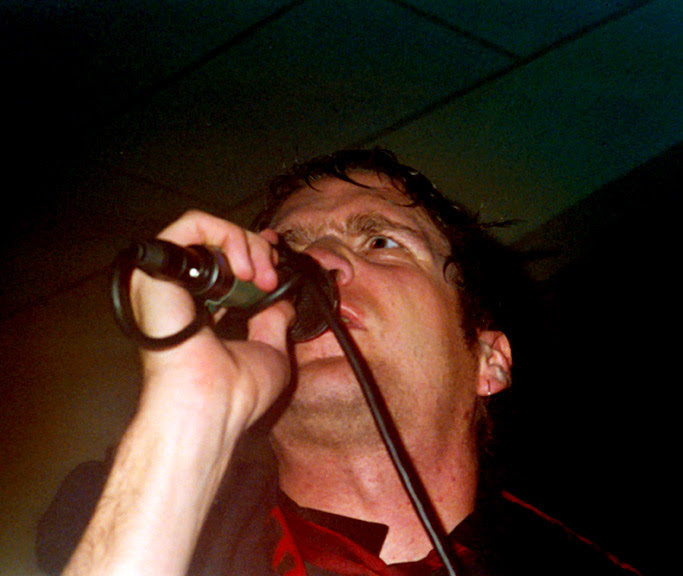 The Mukilteo Fairies was a brilliant band name that only a Washington local would get. It's a pun off of Mukilteo Ferry, the ferry from a town North of Seattle to Whidbey Island. The band came out of Olympia in 1993 and broke up only a year later. They played hardcore with queer oriented lyrics (often dubbed Queercore or Homocore in that era). They played lots of fast and furious songs and had a huge following during their somewhat short existence. While they played what was essentially grindcore, because of their location and connections, they ended up having most of their releases come out on indie pop labels that didn't exactly know how to market them. Mukilteo Fairies live shows were crazy, singer Josh Plague (Joshua Plogue) would constantly jump out in the audience and audience members would sing along in his microphone. This photo I think is of the band playing at the Goathouse. The band played their final show at Olympia's Capitol Theater. For being around less than two years, the band actually had quite a few releases, including many after they broke up. I think that shows to some extent the desire/need for more queer voices in the hardcore punk scene.

Discography:
After the band broke up Quitty and Josh started Behead the Prophet, No Lord Shall Live, then Josh was in Lords of Lightspeed. He now is a vegan cook and cookbook author and has a great online biography at All Things Joshua. Rebecca Bayse moved to Columbus, Ohio and started The Emerald Down and Jason Reece moved to Texas to form ...And You Will Know Us By The Trail of Dead.

Cool! I haven't thought about this band in a decade. A friend put the "Special Rites" EP on a mix tape he gave me, shit, it must have been 1993/94! I had never heard anything that powerful and insane up to that point. Thank God for the internet, I can explore this mysterious band further. Thanks!