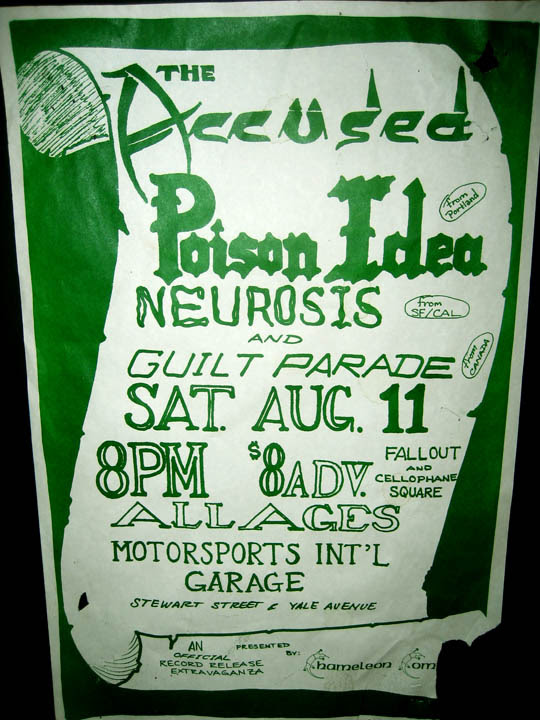 The Motorsports International Garage was exactly as it sounds like, an old parking garage. It was a covered parking garage located in Seattle on the corner of Stewart and Yale, a block from where Rkcndy was. For a short time period in 1990-91 it hosted rock and punk shows before getting demolished. The venue had a cement floor, rectangle shape and fit 1500 people. While there were only a handful of shows at the Motorsports garage, most of them were fairly legendary.

On September 22, 1990, Nirvana, The Melvins, The Dwarves and The Derelicts played. It was the first time Nirvana played "In Bloom," and it's when the drummer from D.C. band Scream, Dave Grohl, was in the audience checking out Nirvana and his friends The Melvins. He would end up joining Nirvana a few months later. During The Dwarves set that night, lead singer Blag Dahlia threw an unopened can of Pepsi into the crowd. It hit a kid in the face right in front of me and he got a blood nose and seemed knocked out. As his friends dragged him to the back of the theater, he left a trail of bloody across my Doc Martens. We expected that kind of chaos from The Dwarves, I think the crowd actually cheered as it happened. I later saw some kid being carried out on a stretcher by paramedics, I doubt it was the Pepsi kid, more likely someone hit the pavement too hard stage diving or crowd surfing during Nirvana's 54 minute set (which is bootlegged and available on CDR for the diehard fans that want to seek it out, there is also a live video floating around).