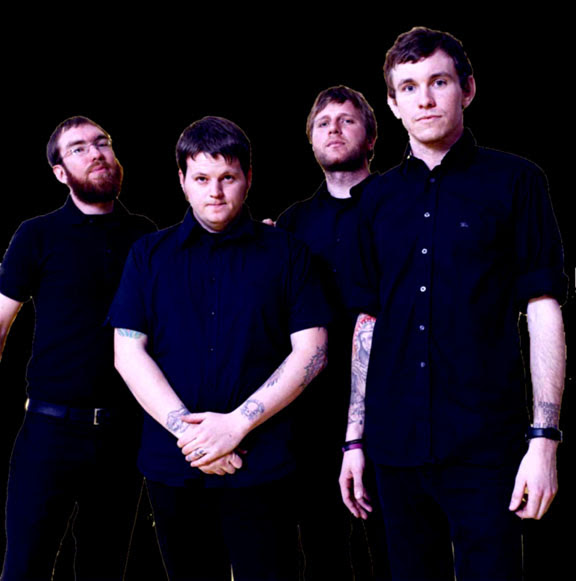 This is an interview I did with Against Me! back in August 2005, right before their third album "Searching for a Former Clarity" was released:

Against Me! has been on of the more exciting bands in punk rock in the past few years. Their songs have an anthem-like quality—catchy personal, political and social sing-a-longs, laced with emotion, humor, sarcasm and truth. The band has come along way from the fairly humble beginnings to headlining sold-out shows. Their albums “Reinventing Axl Rose” and “The Eternal Cowboy” were met with enormous praise far beyond the punk scene, drawing comparisons to the likes of Billy Bragg and the Clash. On the verge of the release of their third album, Against Me! will soon again enter our lives and hearts with their inspirational music. I recently talked with singer and guitarist Tom Gabel the night before the band was set to headline the legendary CBGB’s in a benefit show to help save the troubled club.

Gabel began the interview fairly humble and reserved, reluctant to talk much about politics and the band’s success. In the punk scene, when a band that’s toured so much and befriended so many people in the underground finds commercial success and a larger audience, things always get a bit tricky. Sadly, we try to cling to the way things used to be and bands that progress beyond a fairly insular community often become targets for frustration and anger. It’s really too bad, especially with such a great group of guys like Against Me!, who have such a positive attitude and genuine respect for all their fans and friends. Gabel admitted halfway through our discussion, “I fear certain questions and talking about political things because I fear so much judgment at this point... and it’s hard, because you don’t want to focus on it.”

The downside to success, he explained, can be fairly frustrating at times. “The majority of places you get it are reading Internet message boards or a letter from an irate fan. Sometimes it really perplexes me how people can casually be so mean. We are not doing anything to hurt anybody and we’re just making records and touring. We definitely get our share of shit for every choice we make, but I think for myself as a person, I don’t really want to focus on negative things or being around people that have negative attitudes. I don’t want to get caught up in shit talking or need to prove that I’m punk or whatever, I just want to play in a fucking band. And I’d like people to be able to take something from that, whether it’s a personal or political message. If they can take something from our music, then that’s amazing.”

Make no mistake about it, the band is enjoying its success. We discussed their upcoming shows opening for Green Day. Gabel said, “It will be in front of 50,000 people, which is insane! Yesterday when we were flying into New York we literally flew over Giant’s Stadium and we were like ‘Holy shit!’ Mentally, as a band, it’s great. It keeps you challenged, it keeps things fresh—you want to have new experiences. Playing bigger shows is great because it’s challenging, and that’s something you want to make sure you are doing for yourself all the time—throwing yourself into a different situation and seeing if you can hold water. I’ve never played in a stadium before and I don’t know if I’ll like it or I’ll hate it, but I want to do it so I will be able to make an informed opinion about it.”

I told Gabel how a friend of mine said Against Me! makes politics fun again and that we need more bands that can bring dance to the revolution. While he loves this response from fans, he downplayed the band’s anarchist politics and explained, “I wouldn’t say we have a certain political aim or are looking for a particular response from our audience. It’s not really thought out in that way. We are just playing the music that comes naturally to us as a band and we think its fun and have a good time. We hope that translates to people, but we’re not doing it for anyone’s approval.”

I wondered about the title of the new album, “Searching for a Former Clarity.” Tom said, “It’s meant to be open-ended, enough so that people might infer some sort meaning from the title, but that meaning isn’t necessarily the correct one. It’s up to the listener to decide what it means. It is the first time I’ve written an album under a working title. Usually we make the record, then when it’s time for us to name it we have to wonder, ‘Well, what do we name it?’ This is the first time I had the title and wrote the music under the title.” He laughed and continued, “But I didn’t tell anybody else in the band that I had the title already!” And how did it turn out? “If you are someone that thought between the first two albums there was some sort of evolution taking place, then this album would be where that evolution landed. Right now we feel very comfortable as a band.”