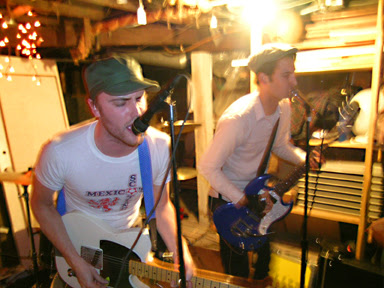 The scene: Then Stranger music editor Jennifer Maerz' house, sometime around Xmas 2004. The Popular Shapes rock the packed basement, then the party moves upstairs. The old Spits keyboard player gets naked and humps the Christmas tree. The whole house turns into a drunken dance party. Outkast's "Hey Ya" is the hit song of the month, it gets played about 3 times in a row as everyone gets crazy. Jennifer falls off her coffee table we're dancing on, laughter ensues, although I think she actually gets injured. Happy fucking holidays.

The Popular Shapes played damaged art punk with time changes, hardcore bursts, discordant guitars, and angular riffs. For a brief moment in the mid-2000s, there were a handful of bands in Seattle on a similar wavelength, including The A-Frames, Intelligence and The Dipers.

Discography:
Nicholas Brawley also played in The Intelligence. He moved to San Francisco to do design work, including a stint from 2004-2006 as art director of Bitch magazine. Trent played in The Holy Ghost Revival for a while.