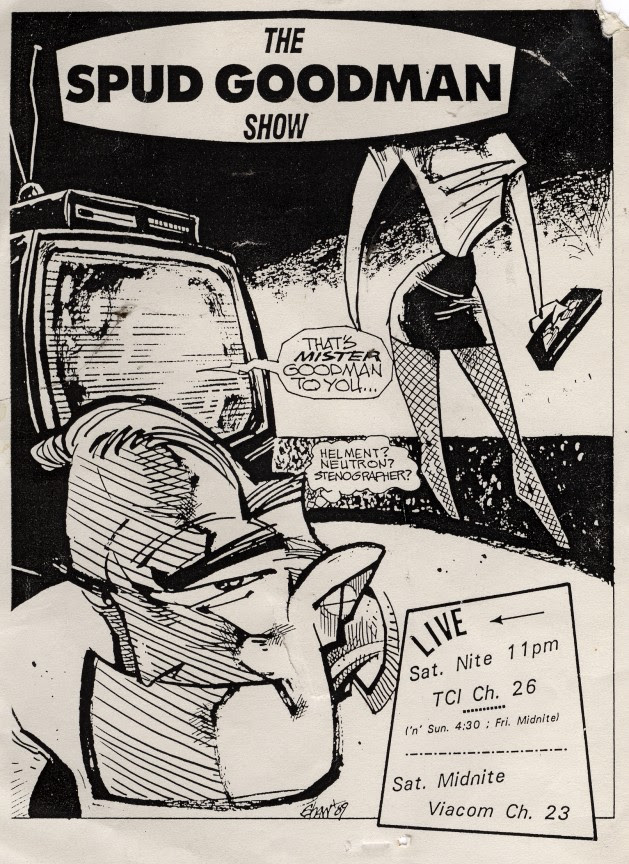 The Spud Goodman Show was an often bizarre hodge-podge show in Seattle during the '80s and '90s. I remember first catching it on public access in probably the late-'80s. Spud would sit in a chair in his living room with a spatula in his hand drinking Pepto Bismol, with a host of other characters around him in costume, as he told dumb jokes, had odd commentary, and would interview guests. At times it was painful to watch, at others, there were fairly brilliant moments of improv. Spud's friend Chick would always have some sort of adversarial relationship with him vying for the attention of the camera and Spud would have to verbally smack him back into place. Other characters included Spud's parents (I have no idea if they were his real parents or not, but I wouldn't doubt it), a guy dressed like Elvis that would play an accordion, and other costumed weirdness. It was a great show to watch on acid (kinda like that movie Shredder Orpheus I mentioned earlier this week).

By 1992 The Spud Goodman Show had moved from cable access to KTZZ, Channel 22, the same station that hosted Bombshelter Videos and Northwest Rock Music Videos. A few years later the show ran it's course and KTZZ pulled the plug on it (and all local programming). Above is an old flyer adversing the show I think I picked up at a record store on the Ave. A lot of the shows' history and some archived footage can be found at spudgoodman.com, so obviously I'm not the only one that remembers the show.

i remember a classic episode where spud had "the checkers champion of pierce county" on and made the guy cry.