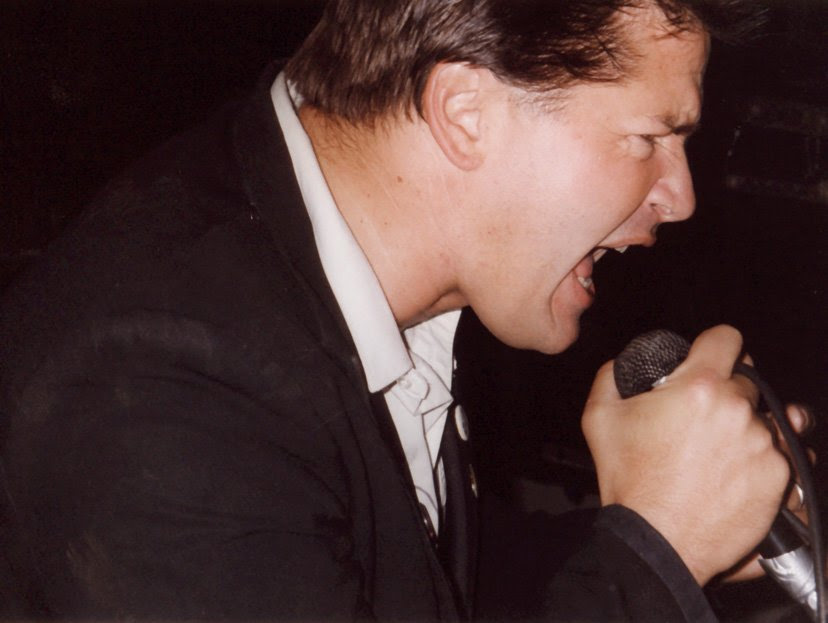 I first heard and saw TSOL in the 1984 movie "Suburbia" about "Suburban punks running amok." I was just getting into punk music around this time, but still listening to a lot of goth and alternative music. In the movie TSOL performed live and singer Jack Grisham had kind of a goth look and feel to him, the band had keyboards and guitars, and they pretty much seemed to me to bridge both the punk and goth subcultures. I knew nothing about their past or music, but went out and bought their "Beneath the Shadows" album on Alternative Tentacles and like it. I started reading up on the band and found that they used to be more hardcore punk and their old fans were disgusted by how their sound evolved, soon afterwards Grisham quit the band and they became more of a big hair metal band that put out an album on Enigma (a label in the '80s that was putting out stuff I was buying like 45 Grave, Dead Milkmen and The Untouchables). Since I wasn't into TSOL's new look and sound, I just played my "Beneath the Shadows" album and never really sought out their earlier music for a few years.

In 1986 I moved to Seattle's University District and started shopping for punk records every day at places like Cellophane Square, Second Time Around, Peaches, Golden Oldies and a handful of other used record stores. I scored a lot of great vinyl for a couple bucks that's worth $50 to $250 now because punk wasn't exactly popular then. I picked up TSOL's first single and it was totally raw and great, then I slowly found their other early vinyl. Man, I was hooked! I'd later read all about the band in We Got the Neutron Bomb and get pretty fascinated with their history and story. This book is mandatory reading for any punk fan, along with Please Kill Me. After tracking down TSOL's early releases I was pretty bummed with what the band had become... that is until the original members reformed the band, fought for the rights to the music, and toured again! This photo is from that tour when they played the Breakroom on Seattle's Capitol Hill. I think in 1999 or 2000. The show was excellent, Grisham looked older and had gained some weight, but he jumped around on stage, got in people faces, and performed like he was in his teens again as they ripped through all their old material. After the show he hung out and shook hands and talked to us, which ruled. Excellent band, excellent show.

Was this the show where the Briefs opened? If so it was in 2001, extremely close to 9/11, like only a day or two afterwards. I remember a weird vibe around the room and Jack making some half-joking comments about how it was a really bad time to be a political punk band. Regardless, both bands kicked a lot of ass and I remember it as the first time I felt myself having fun again.

Hey Bobby! No, this photo was from a a few years earlier. Looking at their online tour history, it was September 29, 1999. It looks like it was their second Seattle show after reuniting, they also played in July of '99 at DV8 on the Social Chaos tour.