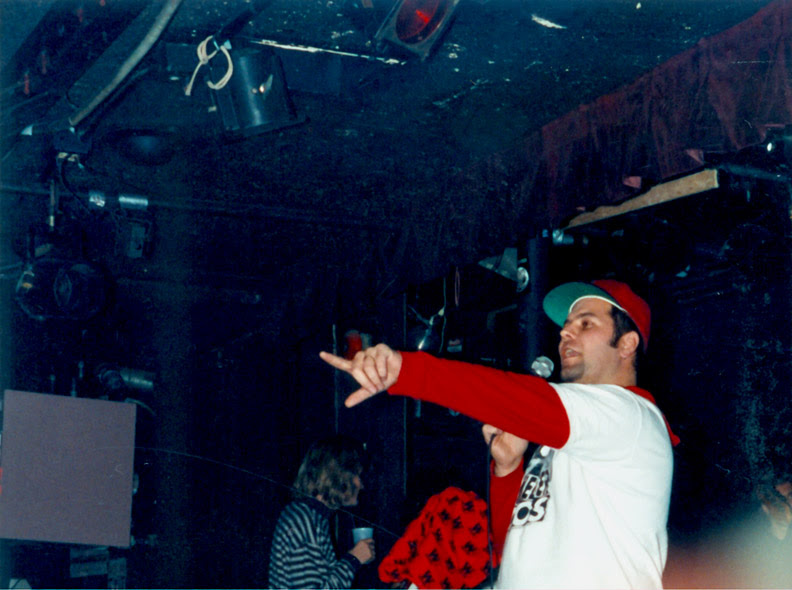 Naked Raygun will be playing Seattle in a few weeks, the first time since they reunited. Getting hyped for the show I was listening to an old CD and their song "Bombshelter" came on and a flood of memories came back about Bombshelter Videos, a Northwest TV show that used the Naked Raygun song as their theme song.

This photo is of Bombshelter host Bill Bored (in real life Frank Harlan) from a show he MC'ed at the Off Ramp back in the early '90s. Bombshelter Videos ran for a year on Channel 11 (KSTW) for a year starting in November of 1987, then it moved to Channel 22 (KTZZ) for a 3 year run. The show had pretty humble beginnings, Bill Bored would pretend to climb down a ladder into a bombshelter covered with band posters and play low-budget punk and alternative videos. Or as Bill Bored said it, he played the latest videos of "UndergroundGarageBandArtThrashNoiseMusic." Some of the bands were well-known underground artists like Bad Brains, Black Flag, Sonic Youth, Mojo Nixon and The Dead Milkmen, or metal bands like Voivod and Death Angel, but there was always room for local bands and bizarre stuff you had never heard before--like a song about a vacuum attachment called "Crevice Tool" or a transvestite dressed as a housewife singing "Open up my lovin' oven!" 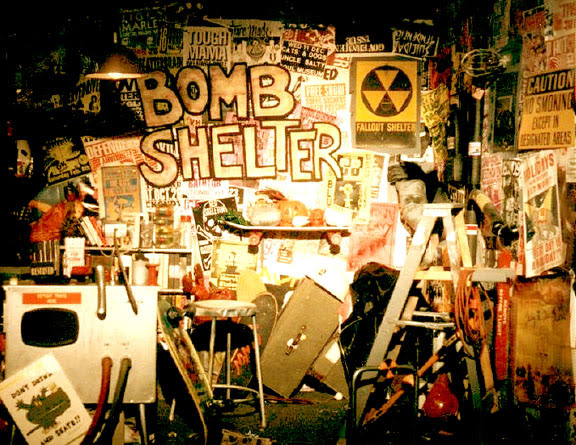 I watched the show fairly religiously, often setting up the VCR to tape episodes if I was out at a show or party. To this day, while I've gotten rid of almost all of my old VHS tapes, I've hung on to my shitty copies of Bombshelter Videos (and another local show, Almost Live). What made the show so great, besides the punk rock and local videos, was Harlan's goofy demeanor and dumb jokes, which post-Bombshelter (and Northwest Rock, another video show he did later with just local videos) he turned into a career as entertainer and facilitator.

Frank has put a few clips and videos from the show up on YouTube. He also has a website for Bombshelter Videos with some of the episode guides and more info for anyone on a nostalgia kick.

the show started on a UHF channel in anchorage alaska.
i use to watch that shit all the time.
frank also did a great zine called warning before starting the video show.

It was this and the Spud Goodman Show, and Live Meltdown (the public TV metal show) that caught my attention when I was young. Nice post!!! ~ Brett in Sedro-Woolley!!!

spud goodman! damn that brings back memories! my fave episode had spud bring the "checkers champion of pierce county" to tears with his ribbing.

I too have some BSV on VHS. I only wish I had some Almost Live. I really miss the old school Almost Live, when Ross Shaffer hosted the show, they had a band, and the show ran for an hour as a Letterman-style interview show with some sketches thrown in.

I have been searching for the "Crevice Tool" song for forever- I used to tape Bombshelter too, but ended up sending them to a friend in Fargo, ND as I was taping them. You might have some of the lost episodes- Frank mentions on the website that some have been lost. If you feel like poking through them I would love to know who did "Crevice Tool"- Thanks. E-mail me at valvashon at hotmail.com

I just found the Inhale Einstein, Exhale Hitler song online and thought I'd search for the Crevice Tool one. There was also one with someone doing something interesting with a french baguette...anyone remember that?? LOVED that show!!