The Central Tavern used to be Punk Rock 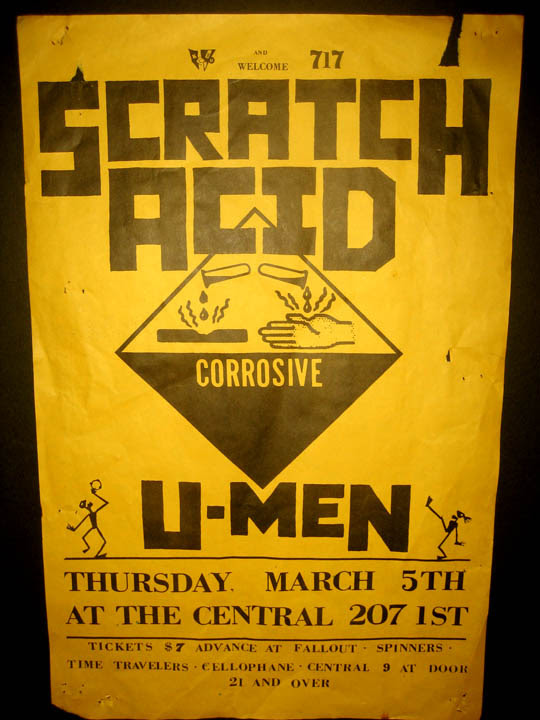 When I was under 21 and Seattle's Teen Dance Hall Ordinance was in full-effect, I, like many other underage kids would road trek to Tacoma, Bremerton, Olympia and other nearby cities to catch punk shows. We'd also be completely disappointed when we'd see flyers like this one for bands we were dying to see that would play at bars we couldn't get into. The Central Tavern in Seattle's Pioneer Square seemed to host a ton of great punk shows when I was in my late teens, from Black Flag to DOA, I collected the flyers of telephone poles, even though I couldn't attend the shows.

Many of the early Sub Pop shows took place at The Central. In Everett True's Nirvana book, photographer Charles Peterson describes the scene:

What were the audiences like at the early Seattle Sub Pop shows?
"Small," replies Peterson. "No more than a hundred people. The Central Tavern held 250 at most."
How did the audience dress?
"Terribly," laughs the photographer. "Dress was not a big concern in Seattle. It still isn't. There's a picture of an early audience in '83 that I call the 'stray dogs from every village'. There is no uniform sense of style at all. There's a little big of hippie, some glam, there's the trench coat, the flannel coat. One boy's got the leather jacket with the Sid Vicious pin on it, a little bit of punk. We just liked thrift store clothes. It was an amalgamation of stuff.

Oddly enough, by the time I was old enough to go to bar shows, there were really no longer any punk or grunge shows at the Central. It had switched over to being part of Pioneer Square's "Joint Cover Night" and featured mostly standard bar rock bands and roving groups of young frat boys and the bridge and tunnel crowd. Pretty much exactly as it is today.