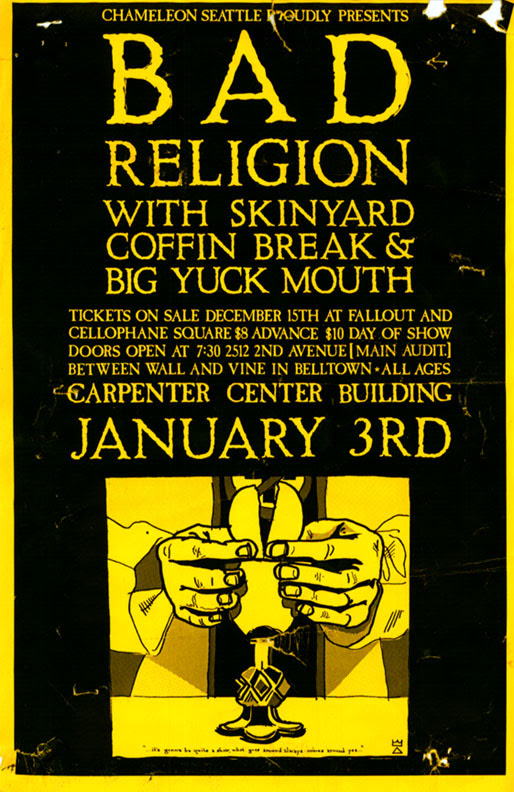 Bad Religion's 1988 album "Suffer" is credited by many to be the album that resurrected the California punk rock scene. While I don't know about that, I do know it had a profound effect on my life. It's one of those records that completely blew me away from the lyrics to the energy of the music. "Suffer" was packed with tight crunchy hardcore punk songs, fantastic melodies and backup vocals, insightful ideas, and pissed off spirit that still gave listeners hope. For me it was a kick in the pants at a time when I needed motivation. Listening to Bad Religion not only made we want to destroy things, but it made want to rebuild them, better and stronger than they were before. "Suffer" surely marked Bad Religion's comeback from their glory in the early '80s, the followed it up with "No Control" in 1989 and "Against the Grain" in 1990, both great albums, then I think to some extent they fell into a rut by releasing too many albums in quick succession that sounded too much alike, it watered down their impact. But in the tail end of the '80s and early '90s, I absolutely loved this band!

This flyer was from a fairly weird show Bad Religion played on the "Against the Grain" tour, most likely in January of 1991. I think it was the only show ever held in this venue in downtown Seattle, which had a huge gymnasium type room with hard wood floors and a 4 foot stage. My friend Charlie and I got a ride to the show with this guy Dan Brougher we used to know and we hung all out during the first band in his car gulping down 40s to gear up for the show. We were big Coffin Break fans, we we went in for them. Then Skin Yard played. Now, I liked Skin Yard a lot, but they were not a straight up punk band. They played more what I'd call heavy psychedelic punk... which seemed odd to sandwich between Coffin Break and Bad Religion, but somehow it worked that night, I think they turn their ups to eleven and played faster and louder than usual. Then Bad Religion played and they totally destroyed. My god. They played so many songs off their early albums in rapid succession it was amazing. Seeing as most of their songs clocked in under two minutes, I got to hear most of my favorite songs of "Suffer" and "How Could Hell Be Any Worse?" (their first LP). I wouldn't be surprised if their was over 30 songs. It was a fantastic show I remember to this day, some 16 years later.

I never realized this was BR first show in seattle.

Was it their first Seattle show? I looked all over for tour dates and schedules but couldn't find them back that far.

Yeah when I worked at denny's in Northgate Jay Bently and Pete Finestone came in and I spoke with them for about 2 hours. That show came up because I had a bad religion flyer from the early 80's he said that tour never happened and that the carpenters hall show was the first in seattle.

Excellent story, I'd would have loved to talk to those guys for two hours!

another interesting not I found out recently that was the show that coffin break signed to epitaph, they signed the deal right before they played.