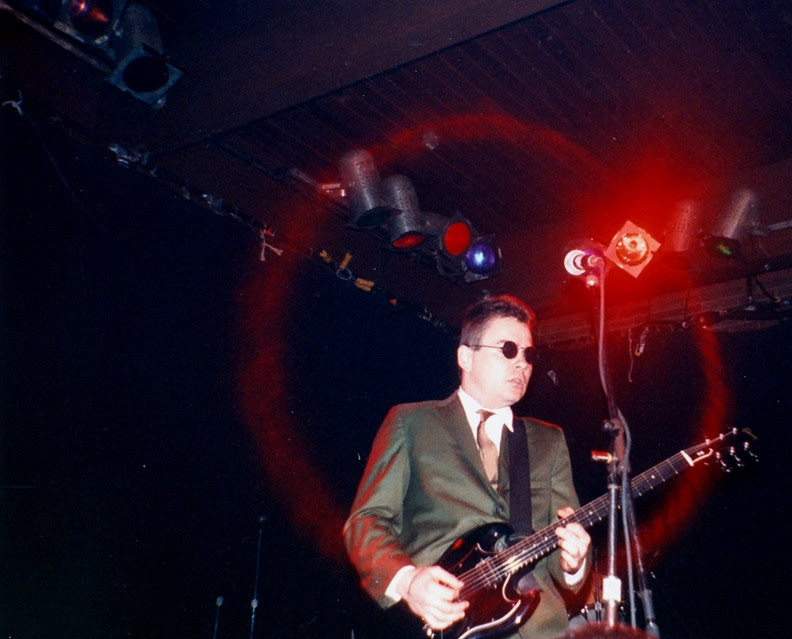 "Excuse me, Captain Ahab, how did you get me so stoned?" -opening line of from the second song on The Didjits' "Hornet Pinata" album

I had picked up a few Didjits records in the '80s (their excellent "Hey Judester" LP and a few singles), but it wasn't until their 1990 album "Hornet Pinata" on Touch & Go when I was properly blown away. Blown away isn't even the right description, because that record is balls-to-the-wall amped up rock from when you drop the needle until it ends. 17 years later I'm still in love with this album. When I first brought it home, I played it... then I got stoned and played it 5 more times in a row! I don't know how many other Didjits fanatics are out there, but obviously the band had an effect on others seeing how the reviews of this album are fantastic on Amazon, The Offspring later covered the opening song "Killboy Powerhead," and The Supersuckers later recruited frontman Rick Sims to play guitar for them.

The Didjits formed in the mid-'80s in the unlikely rock'n'roll town of Mattoon, Illinois. While fairly mild-mannered offstage, Rick Sims took on the persona of Rick Didjit, a feather boa, sunglasses and suit wearing over the top frontman. He was backed up by Doug Evans on bass and his brother Brad Sims on drums (later Rey Washam from Scratch Acid drummed, as did Todd Cole). But the band was totally the Rick Sims show, he was obnoxious towards the crowd and really got things riled up live, the rockstar persona he took on was fun to watch and totally hilarious if you were in on the joke. I remember eating dinner with and interviewing the band at the Off Ramp before a show and being surprised how mellow and fairly down to earth Rick Sims was. He said it all changes when he puts on his sunglasses and boa. Ha!

The Didjits broke up in 1994 after a string of tours and releases, including 6 albums and a Sub Pop Singles Club 7". In 1995 Sims replaced Ron Heathman as the guitarist for The Supersuckers while he took "a leave of absence" from the band. He played guitar on "The Sacrilicious Sounds of the Supersuckers," toured with the band, and even sang one or two songs live. After leaving the Supersuckers, Sims started The Gaza Strippers in 1996 with Darren Hooper on bass and Todd Marino on drums. The Gaza Strippers have released 3 albums, the latest in 2002.

The Didjits original members reformed the band and played live September 9, 2006 for the Touch and Go 25th Anniversary party in Chicago. They played a second show the next weekend in Champaign. This photo of Rick Sims is from when the band played The OffRamp in Seattle in the early '90s.

Rick Sims, one of the greatest Rock'n'Roller that walked the earth! I´ve seen the Didjits twice in Berlin, Germany and they kicked ass. The shows included insulting the audience and spitting at them, but talking to Rick after the show, he turn out to be a great guy telling storys about his time as roadie for Cheap Trick, especially being there at Budokan.
Gaza Strippers were cool, too, but Didjits were more special at their time with regard to their fellow bands back then.
Has Rick anything going right now?

I know I am way late on the comments, but man did that band kick ass. I probably saw them live 10 times in Champaign and Charleston, IL. How they did not become more famous I don't know. The Offspring owe their fame to the Didijits and I'm not just talking about the Killboy cover. Frequently when I'm listening to the Offspring I'd swear I'm listening to Rick.

Rock n' roll like hell...Fistmagnet style. Rick recently choked on his own vomit, but is in great condition and recovering at Cook County Hospital in Chicago, IL.

Saw the Didjits twice in Hamburg and it was great how Rick Sims turned the crowd against him. While they were playing there was a constant rain of beer that people were throwing in his direction. Great band! I would appreciate a comeback show anytime!