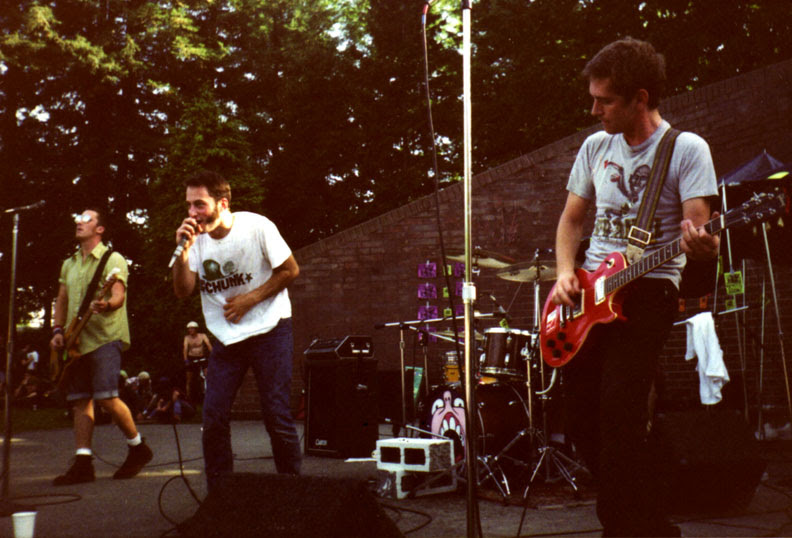 I'm having a tough time remembering all the details of the show this photo was shot at. It was at Volunteer Park in 1989 or 1990 and it was some sort of anarchy-themed show with a bunch of political punk bands. Gas Huffer seemed sort of like an odd band on the bill, but were probably the biggest name. Oh, and there was a flag burning at this show, I still have a star from the flag on my leather jacket held on by cone spikes, ha ha ha.

Right around this time flag burning was a big deal both in Seattle and on the national scene, where they were trying to pass some sort of anti-flag desecration act. The punk community got involved when a local punk/skin kid named Darius Strong pissed on and later burned a flag and was one of four people that were arrested and were in one of the flag desecration trials. Here's an eye witness account of the night he was arrested:

"A skinhead climbed the pole to the roof of the building. He produced another flag. The crowd, mistakenly assuming he was a NAZI skinhead, began chanting "Fuck the NAZIs," etc. He screamed back at them, taunted them, then demonstrated his solidarity by throwing the flag down and pissing on it. This was met with applause. The skinhead (Darius Strong) then climbed down and walked away. People milled around for awhile, then wandered off."

Ha ha ha. Strong made it his thing, the pissing on and burning of flags became a regular deal from him, I remember him doing it outside punk shows at Washington Hall and at parties (he ended up dating a friend of a friend). It was kind of cool at the time to see a guy you'd see at parties and shows on the local and national news all decked out in punk gear and talking about flag burning and freedom, although it was kind ridiculous too. Eventually the charges against Strong and the other three Seattle people were dismissed.

And what's this have to do with Gas Huffer? Very little, although that Darius Strong guy helped burn a flag on stage at this show and ironically enough, Gas Huffer's first single was called "Firebug" and was all about someone that like to burn things. This is probably my earliest photo of Gas Huffer before I had even started doing 10 Things zine, I'm pretty sure this picture ran with a Seattle scene report I wrote for Maximum Rock'n'Roll.