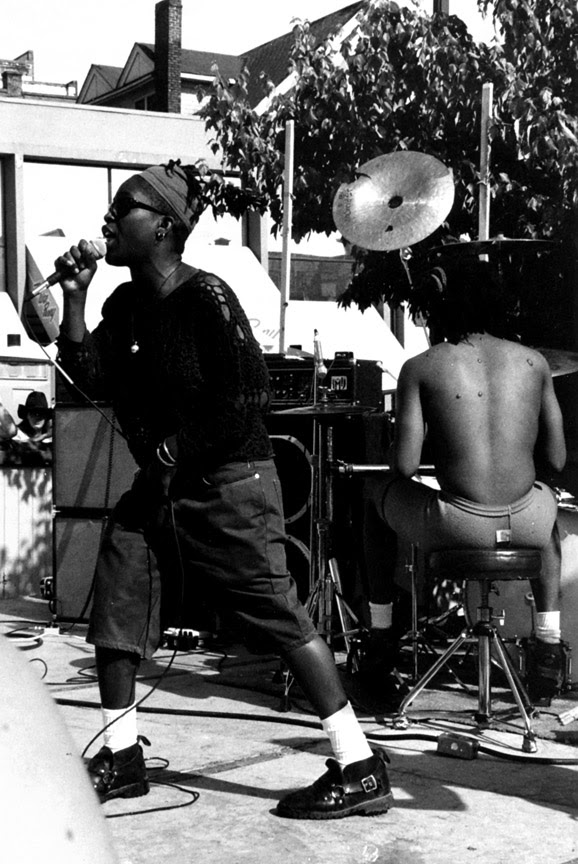 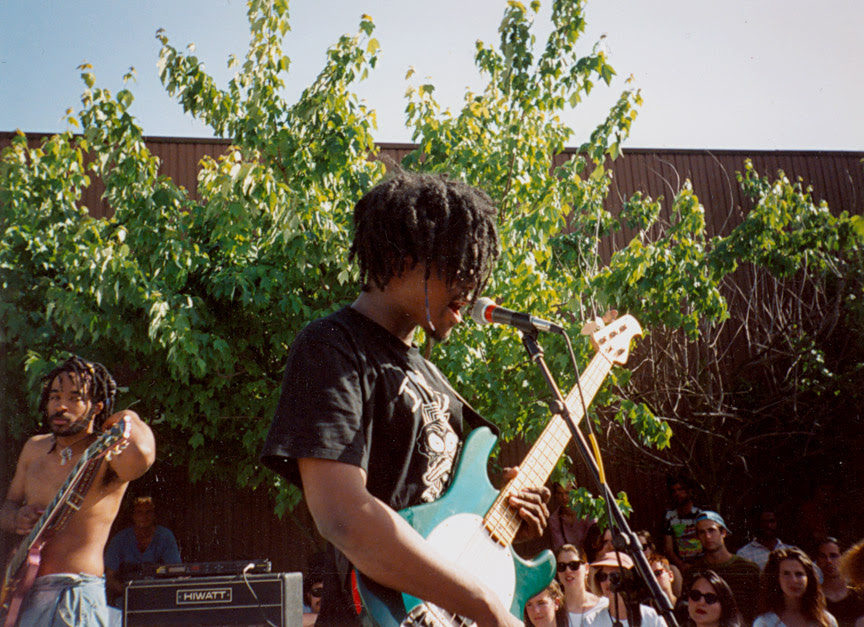 IMIJ was a Seattle band around in the early '90s that took their name from Jimi Hendrix, spelling his first name backwards. The singer's name was Shannon and they had sort of a punk, funk, rock hybrid going on... they'd play with similar bands like Sweaty Nipples occasionally, but mostly with Rathouse bands like The Gits and Hammerbox. I'm not sure if they ever put an album out (I could find one mention of "In Gods You Lust" in a profile of the drummer online, but no other confirmation of it, I'm gonna do some digging with ex-band members). They did have a song entitled "Friday" on the compilation LP/CD "Power Flush: San Francisco, Seattle & You." I probably saw the band live probably half a dozen times and remember partying with the singer outside of a punk show or two, she was even louder than me. These photos were from when the band played live in June of 1992 at the University District Street Fair.

Oh man-I lived with Chris and his girlfriend at the old IMIJ house on 10th ave e. They were so great-I loved that band. great to see some photos!!!!

The singer's full name is Shannon Funchess. I know she later sang on a TV on the Radio track and lives in NY now. Not sure what else she's done.

Sweet, thanks for the info on Shannon, I just found her on MySpace and am checking out her band in NYC:

No problem. She and I were friends back in HS in SpoHell. I was part of her first band when we were 14 or 15, the Inebriated Arsonist. We mostly did awful amateur covers of the Dickies and the Sex Pistols.

I'm trying remember if it was this band or another that did a show with Diddly Squat (Nate Mendel & Erik Akre's first band). I still have DS's first demo tape, just wish I had a tape deck, it rocked!

Yeah, I have Diddly Squat's one 7" they put out. I definitely plan to burn it and put MP3s up at some point when I get around to doing that with my old vinyl. There's a Tri-Cities blog I link to that has one of their songs up, you can hear it here: http://www.tricitymusic.net/mp3blog

Thanks for the link, christ, I haven't heard that song in at least 15 yrs. I have that comp tape somewhere too. Nate had just learned to play bass and was walking through a line Jason had taught him. Erik was freaking amazing. You can definitely hear the HS marching band influence. :-) I remember once his Marching band instructor flew him from Spokane where DS was playing to I think Portland so he would make it to a competition.

I'm the former bass player of IMIJ (cedric ross). The anonymous comment about Shannon is all true. The rest of us may have changed over the years but Shannon hasn't aged a bit. Thanks for the love. It really means a lot! I gotta tell Cris, Davee and Shannon about this. Lonnie lives in Oly but I don't see hm much these days. I'll tell him too when I see him next.

Davee and I were just talking last week about putting up an IMIJ myspace, facebook account soon.

Drop me a line!
myspace.com/cedric_seattle

IMIJ did put out a cd called In Gods You Lust. I have a copy. I live in Helsinki, Finland now, but lived in Seattle in the 90s. Used to know Lonnie (and his lazy-ass dogs!) and my band Fear the Cow played with IMIJ on a couple of occasions...

I suppose if the band doesnt object, I could rip the ep... It'd be nice if people heard it, I think.

Used to love these guys, and have searched a lot of places in Seattle for Kim. Chris....where is she now?? 10 street house,Chris, we met just after your piercing. Find me my Cat!! return to loveyourphleb@yahoo.com ..Jezebel

Still have that "stop the damage" t-shirt, one of the IMIJ members gave me this shirt on a wild night out after an Urban Dance Squad gig in Seattle, Never stayed in touch... though, here I am.
DJ DNA